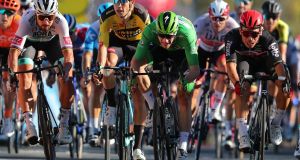 It was billed as the last sprint showdown before the Champs-Elysées, and may well have decided the first jersey winner of this year’s Tour de France. Just not quite the stage encore at Poitiers that Sam Bennett was looking for.

Caught somewhere between a mess and a scare, Bennett found himself run out of back-to-back stage victories by the width of the rim on his front wheel, overtaken at the death of stage 11 by his increasingly close rival Caleb Ewan from Australia, who had finished runner-up to the Irish rider the day before, taking his fifth Tour stage win in all.

At the same time Bennett’s rival for the green jersey, Peter Sagan, was overtaking Wout van Aert to their right, originally finishing second, only using his head and shoulders in the process: once reviewed by the race commissaries, Sagan was done for dangerous riding, relegated to the back of the bunch (in this case 85th), and deducted all of his points and quarter of the stage winner (in this case 43).

It means Bennett defended his green jersey with a now surely insurmountable lead on his Slovak rival, 243 points to 175, given the last properly flat stage will be that final run into Paris on Sunday week. Bennett still has to make it that far, easier said than done, and for now clearly felt Wednesday’s stage finish was a chance missed rather than gained.

“I don’t really know what happened, it was just so hectic,” said Bennett, who has now finished first, second (twice), third and fourth so far. “The team did a fantastic job all day, looking after me, and just the final few hundred metres, it was hard to make the switch from following a team-mate to going it alone, I found myself too far forward, too early.

“Then I found myself trying to drift back, but it was a bit late, then they came at speed, and it was a complete mess. I just tried to limit my losses, and get the best result I could.”

For Van Aert (Jumbo-Visma), the Belgian who admitted to being “really scared” at Sagan’s final sprint tactics, the decision to relegate the Slovak was clearly the right one, although Bennett was slower to judge: “Like, a big part of sprinting is rubbing shoulders, but I’ll have to see it, I really don’t know what happened.”

With wheels and perhaps emotions still in spin from Tuesday’s first stage win, Bennett possibly did lose some of his focus. With his Deceuninck-QuickStep team making absolutely sure stage 11 also came down to the pure sprinters, Bennett appeared to be in the perfect position once again on the long wide-open road that took the bunch into the finish.

There was some confusion in the final 6km, which included a short climb 3km from the finish, when two riders broke off the front – attempting to disrupt the train – Lukas Pöstlberger Bora-Hansgrohe followed by Kasper Asgreen of Deceuninck-QuickStep, but there were all together again entering the last 2km, and Bennett insisted this didn’t impact on his finish.

He also rejected the suggestion Ewan (Lotto Soudal) was taking an advantage by simply sitting on his wheel again: “No, what can you do? If I had to do it to him, I probably would. His lead-out train don’t get him to the final. But I just focus on myself, keep doing what I’m doing.”

Bennett may well have felt like he had a special rendezvous with the stage 11 finish at Poitiers: when a Tour stage last finished here, in 1978, fellow Carrick-on-Suir rider Seán Kelly won the first of his five stages in the Tour de France, the then 22-year-old first home in the small five-man breakaway sprint on the banks of the Clain river. Alas, it wasn’t to be.

After suffering in a bad crash on Tuesday, Nicolas Roche rode in safely behind on this stage in 138th, in the same group as Dan Martin, 133rd, that finished four minutes and 25 seconds behind. Primoz Roglic from Jumbo-Visma, who last Sunday became the first rider from Slovenia to win the leader’s yellow jersey, comfortably defended it again and still sits 21 seconds ahead of defending champion Egan Bernal from Ineos Grenadiers

Thursday’s stage 12, the 218km from Chauvigny to Sarran-Corrèze, is the longest of the 2020 Tour, and features two categorised climbs in the final 40km.