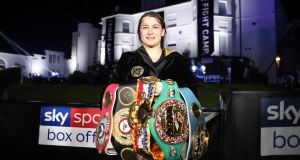 It was in June of last year that Katie Taylor was chosen as our sportswoman of the month for the 12th time in the 14 years since the awards began, her first coming when she was just 19.

That, we noted, was a fair old indication of not just the length of her career, in both the amateur and professional ranks, but of the unrelenting success she has enjoyed too. And on it goes – she now has a 13th award to her name.

Taylor reached the dozen mark after she unified the lightweight division with a victory over Delfine Persoon in Madison Square Garden and it was the same opponent she beat in August, only this time the surroundings – Eddie Hearn’s Matchroom HQ in Essex – were somewhat different.

What was the same was the quality of the bout which, as it had done in New York, went the distance. In their first meeting Taylor won on a controversial majority decision, with one judge calling it a draw, but this time all three gave it to the defending champion, scoring it 98-93, 96-94, 96-94 in her favour.

The Bray woman, then, retained all her titles, WBC, IBF, WBO and WBA, and maintained her unbeaten record, getting the better of the tireless Belgian who once again pushed her to the limit.

Taylor had been scheduled to fight Amanda Serrano in May but that had to be postponed because of the pandemic, Persoon stepping in for the August bout after the Puerto Rican pulled out.

And both women are among the names being bandied about as potential opponents in Taylor’s next contest; Persoon, naturally enough, eager to have a third shot at the champion. Undisputed welterweight champion Jessica McCaskill, who Taylor beat in 2017, is another option, as are English fighters Natasha Jones and Chantelle Cameron. And, of course, there’s that dreaded talk of a ‘crossover’ contest with MMA’s Cris Cyborg.

Taylor says she’ll leave the decision-making on that front to her team while she enjoys her first trip home to Bray since last Christmas. And just before next Christmas, she’ll be in the running for the fifth Sportswoman of the Year award of her career.

Graeme McDowell seeking confidence boost after tough US Open 10:21
Blow for Australian rugby union as Qantas end sponsorship 10:35
Nairo Quintana says he has nothing to hide amid doping investigation 09:25
Jamal Murray to the fore as Nuggets hold off Lakers comeback 09:02
Solskjaer says Mason Greenwood ‘needs to learn how to head a ball’ 08:44
Here is your handy guide to sport on television this week