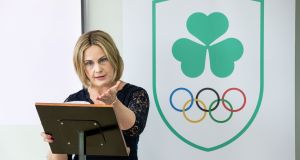 “Something will always happen at an Olympic Games,” says Sarah Keane, her view undercut with ‘something’ being an incident that an emergency plan can manage.

But Rio is still raw. Rio came along and monstered everything that came before. The motherload of pain from dirty boxing referees, an Irish doping offence in the ring with a couple more betting on fights and a police bust on a high ranking International Olympic Committee (IOC) member. Pat Hickey, not for the first time became the media ringmaster.

Since Keane came down the metaphorical Fifth Avenue presidential elevator and entirely refurbished the Olympic Council of Ireland (OCI) to become the Olympic Federation of Ireland (OFI) she is hoping for the 2012 experience this summer, not the X-rated Rio 2016.

But broad hopes now of a London reprise of six medals in Tokyo frames toxic Rio in an even more calamitous light. Three years on with regime change and Ireland’s Olympic house pulled back together, just treasurer Billy Kennedy, more than 20 years in the organisation, retains a seat at the top table within the OFI.

“Billy finishes up this year,” she says of the symbolic final remnants of an end game that began in the Bara da Tojuca where Hickey was arrested in the IOC’s luxury Hotel Windsor Marapendi and will end when the summer’s races are run.

“I can understand why that is said,” she says of the symbolism. “To be fair to Billy, he was never an officer on the board of the OCI. That’s relevant in terms of the past. I have a lot of admiration for him. “

Keane knows the scars of the past remain visible and, although sometimes exasperated by it, understands the enduring interest in the old gunslinger Hickey, a former president, who colourfully ran the domestic wing of the IOC alternately from business class and his office in Dorset Street.

In tough times he never failed to reach for his firearm and call out a government minister to a draw. The public saw him as part establishment menace, part street fighter.

Despite Keane’s successful mop-up operation, questions keep returning to what skeletons after 29 years, the length of Hickey’s presidential term, are falling to the floor in Olympic House in Howth.

That and the euro millions it has cost the organisation in legal fees, the reputational damage and the fact that the ex-boss, self suspended from the IOC and under investigation by the IOC ethics committee, has still not entirely receded into mythology. Few believe the Rio trial will ever take place.

“The only contact is in relation to when we have EGMs and AGMs. He [Hickey] gets papers. So we send out papers and he normally just responds he has received them. That’s it.

“To be fair to him he hasn’t been around the organisation and he hasn’t sought to do anything or be in anyway deflecting us from what we want to do,” she adds. “He has not been around us. He is doing what he is doing. He’s dealing with issues that are in front of him and we are getting on with what’s in front of us.

Politician or administrator, Keane has one thing in common with Hickey. She has never shied away from adversity. A former international water polo player and associate partner in law firm Matheson, in 2004 she knowingly jumped into the CEO job in Irish swimming, then a more fetid environment than post Rio.

By the time it unspooled, Olympic coaches, Derry O’Rourke and Ger Doyle were jailed for child abuse, Frank McCann caged for the burning to death of his wife Esther and Jessica, a toddler they hoped to adopt and another George Gibney, fled the country. That and a litany of legal challenges. Swim Ireland appointed Keane then inexplicably changed their minds. Keane sued and won.

“In Swim Ireland there was a vote of no confidence in the CEO. I was the chief executive at the time. It was my third board meeting. We should never forget what happened. It would be a terrible disservice to people who had terrible things happen to them if we did. We should accept it as part of our history.”

Rio was less serious in its breadth of human damage but exploded into the public domain with greater force.

From the wreckage it was clear Hickey did not govern, he ruled. He was the type of delegate Keane now meets at IOC meetings around the world, where presidents of organisations hold concentrated power and alone take decisions.

She sometimes finds herself as the only woman in a culturally diverse room full of men, where ethics and governance, things she continues to evangelise, run their course in different ways. She doesn’t condone or criticise and has learned to walk a fine line.

“You have to try and understand the environment in which you are operating and at the same time hold your own integrity,” she says. “That’s challenging.”

It was here among the many commissions of the IOC that an industrious Hickey saw the diversity among 206 member nations as a place he could work. Among them Prince Albert II, Britain’s Princess Royal, The Grand Duke of Luxembourg, Amir Sheikh Tamim bin Hamad Al Thani of Qatar, Jordanian Prince Feisal A Hussein, all part of the IOC’s working democracy shooting the breeze with a Dubliner from Castleknock.

Whether it was corrupting or not will be for the Brazilian trial judge. Hickey has always denied any wrongdoing.

“An awful lot of the decision making was made outside of the board table,” says Keane of the years that preceded her. “A lot of information that was pertinent to the board wasn’t given to the board. That’s one of the biggest challenges. It’s often to do with people, with individuals.

“With hindsight and with all the information we can see that decisions came out that I knew nothing about. Whether they were good or bad they should have been discussed.”

She says people have called her ambitious and direct. The OFI reserve money is all gone she says, millions. But she, they, it are planning ahead, prepared for anything but ready for nothing. That’s how the three years have been.

The status of the five ring brand she says is for others to judge but sponsors have come on board. She feels the wheels are in motion.

She cannot say with certainty if she will seek a second presidential term after Tokyo. But higher up her ability has been noticed. She’s chair of the EOC gender equality commission and was appointed this year to the IOC women’s board commission. She’s rubbing shoulders with princes too.

Keane is not thrilled with what could be misconstrued as a pejorative line. There has been no negative commentary about either person. But as a respected frontline warrior on governance she understands why it is pointed out.

“There’s nothing that I’ve seen would indicate there is anything I need to be concerned about. I’ve also worked very closely with the individuals and have seen how they operate,” she says.

“One is gone [from the FAI] five or six years and the other since they joined us. As far as I am aware any of the issues being raised were not relevant to what they were doing in their day to day operations. I feel both are people of integrity and both are very good at what they do. The work I have seen is really excellent on behalf of both of them. Diligent, motivated and [they] do a really good job.”

They are simple principles of athletes and their bewitchery. It’s about the troposphere in which they live and the people around them, who want to be the best themselves and the best in the world. It’s about their ambience and their domain.

“I am inspired by the adversities they face, the resilience they show,” she says. “It’s hard to ask other people to be high performing when you are not high performing. In this environment I constantly feel that.

“Several people have said to me they think I am very ambitious. I don’t think it’s a negative thing. In my view you can’t succeed in working in sport unless you believe in win, win. Because you are dealing with people who really care about things.

Now the corona virus follows the zica of four years ago and is lining up to make Keane’s aphorism that something always happens at the Olympics a reality. Tokyo is already baring its teeth.