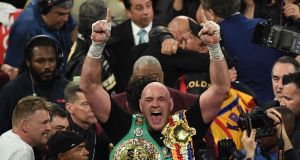 Tyson Fury completed one of the greatest comebacks in modern sports history on Saturday night when he knocked out Deontay Wilder in the seventh round to add the WBC’s version of the world heavyweight championship to his own lineal claim to the title, delivering the definitive outcome their first encounter failed to produce.

The Gypsy King, whose career appeared finished when he left the sport for more than two years amid public battles with addiction and mental illness, made good on his promise to press for a knockout in the hotly anticipated rematch against a man regarded as boxing’s most dangerous puncher. As promised, he came forward from the opening bell, dropped the champion for the first time in a decade with a right hand to the temple in the third round, then again with a clubbing left to the body in the fifth.

By the sixth, Wilder was bleeding from his left ear, his legs were gone and he appeared unable to adequately defend himself as Fury relentlessly picked him apart. When referee Kenny Bayless waved it off at the 1:39 mark of the seventh after the champion’s corner threw in the towel, it set off scenes of pandemonium among the sold-out crowd of 15,816 at the MGM Grand Garden Arena.

“He will be back,” said the 31-year-old Fury, who serenaded the audience with a rendition of Don MacLean’s American Pie immediately afterward. “He will be champion again. But I will say, the king has returned to the top of the throne.”

The conventional wisdom dictated that Fury would have been well-suited to reprise the tactics from their epic split draw 15 months ago, when he spent most of the evening boxing Wilder’s ears off with erratic feints, a stubbornly effective jab and deft upper-body movement belying his towering 6ft 9in frame. Even after suffering knockdowns in the ninth and 12th rounds, the latter of which left him seemingly unconscious on descent, Fury came off the floor each time and finished the round getting the better of the exchanges.

For Saturday’s rematch, Fury replaced Ben Davison, the astute young trainer who marshaled his astonishing comeback from a personal abyss, with the Kronk Gym alumnus SugarHill Steward. He deliberately packed on extra weight, eating six meals and drinking eight litres of water daily in search of a size advantage against the lighter American, coming in at 273lb at Friday’s weigh-in compared to Wilder’s career-high 231lb.

The Briton had also told anyone within earshot that he would be more offensively minded for the sequel, where he went off a slight underdog with the oddsmakers. But no one in the run-up, including Wilder, was certain whether to take him seriously. The only thing you know about Fury is you never know.

Wilder (42-1-1, 41 KOs) sprung from his corner at the opening bell and began pumping double jabs at the challenger’s head while circling to his left, but the challenger slipped most of his opponent’s efforts with ease. Fury was slow to start but moved the 6ft 7in champion back with a combination later in the frame that sent the crowd to their feet and walked through a massive shot from the American in the second. Wilder appeared slower than in their first fight, as if compromised by the extra weight.

Fury (30-0-1, 21 KOs) seemed even more emboldened to start the third, throwing more punches in fluid combination as Wilder’s output began to wane. Toward the end of the round after a break in the action, Fury dropped Wilder with a looping right hand set up with a quick-fire jab along the ropes. It was the only American’s second time on the canvas as a professional and the first since he was floored by journeyman Harold Sconiers, some 30 bouts and nearly 10 years ago in a fight he won by fourth-round knockout. A reeling Wilder went down again in an exchange moments after beating the count, but Bayless ruled it a slip.

By now Wilder, whose bleeding left ear suggested a damaged eardrum, was completely out of sorts as he looked to land the right hand to the point of parody. By the fifth, his legs had abandoned him and he was reduced to crude, lunging attacks that Fury could see from miles away. When Fury sent him to the deck for a second time with a thudding left to the body, you began to wonder when the referee would intervene. Bayless would deduct a point from Fury’s for hitting behind the head during the round but the outcome at that point felt like a fait accompli.

The challenger poured on the punishment in the sixth, making the most of his 85in reach when scoring from the outside and his 271lb form while in-fighting beautifully, pounding away with hooks and uppercuts to the head and body. Wilder was still bleeding from his ear and found himself in full retreat in the moments when he managed to escape from the ropes.

That set the stage for the stunning denouement midway through the seventh, when Wilder’s assistant trainer, Mark Brelend, threw in the towel with the American cornered and absorbing blows in a decision that head trainer Jay Deas disagreed with.

“Mark threw the towel, I didn’t think he should have,” Deas said. “Deontay is the kind of the guy that goes out on his shield. He will tell you straight up: don’t throw the towel in.”

Fury landed 82 of 267 punches (30.7 per cent), compared to only 34 of 141 for Wilder (24.1 per cent), according to Compubox’s punch statistics. He connected on 58 power shots in less than seven full rounds after landing only 38 in the entire first fight. He was the winner of all but one round on the three judges’ scorecards at the time of the stoppage. (The Guardian had it 59-52, a shutout.)

Wilder, who earned the same guaranteed $25m purse for Saturday’s fight as Fury with the potential for more based on the pay-per-view receipts, was gracious in the wake of his first defeat in 44 pro fights. “The best man won tonight … You just take it for what it is. I can make no excuses tonight. I had a lot of complications. But we’ll come back stronger next time around,” said Wilder, who headed directly to a local hospital afterward for stitches and precautionary observations and missed the post-fight press conference. “This is what big-time boxing is all about, the best must fight the best.”

The Alabama native, who captured the WBC’s version of the long-fractured heavyweight championship with a 2015 win over Bermane Stiverne, was attempting to make an 11th consecutive title defense and break a tie on the all-time list with Muhammad Ali, who made 10 during his second reign between 1974 and 1978. Only Joe Louis (25), Larry Holmes (20) and Tommy Burns (11) have made more.

Instead the 31-year-old from Manchester, who descends from Traveller stock with all the fighting heritage that entails, has now earned the WBC strap after winning the WBA, WBO and IBF titles in 2015 when he ended Wladimir Klitschko’s decade-long reign in Düsseldorf.

Fury never lost those belts in the ring, instead surrendering them into the heavyweight ether amid his 31-month layoff, where they have since been absorbed by Britain’s Anthony Joshua. His improbable return to the summit of boxing’s prestige division on Saturday night seemed unthinkable at rock bottom, as he ballooned to 400lbs and contemplated taking his own life.

Now a summit meeting between Fury and Joshua to unite all four titles and crown an undisputed heavyweight champion for the first time since Lennox Lewis looms as perhaps the richest fight in boxing history. That is, if Wilder doesn’t exercise his contractually mandated option for an immediate rematch which Fury’s team said they would honor.

“I look forward to the next fight, the rematch if he wants it,” Fury said. - Guardian