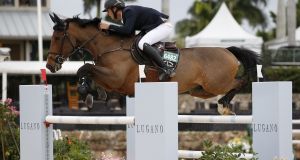 Bertram Allen’s first competitive visit to the Winter Equestrian Festival in Wellington, Florida continued in successful fashion on Friday when he won the 1.45m speed class with Lafayette van Overis.

The Germany-based Wexford native was clear in a time of 63.61 seconds on the nine-year-old Belgian Warmblood gelding which is owned by his family’s Ballywalter Stables. Mexico’s Santiago Lambre finished second with Doloris (65.15) while the USA’s Andrew Kocher was third on Fashion V (65.44).

Allen, who was one of a dozen Irish riders to start in the 67-strong class, said of Lafayette van Overis: “He’s incredibly straightforward. I feel like he truly understands what we are trying to do out there. Ever since I got him, he has been impressing me. He wasn’t bought to be the best horse in the world or to jump five-star Grand Prix, but every question he’s asked he does it with ease and is very competitive.”

Allen is confident that Lafayette van Overis is a horse for the future and is continually impressed with the gelding’s speed, saying, “He’s naturally very fast but also very careful so you don’t ever have the feeling that you need to slow him down.”

Week seven of the WEF commenced on Wednesday when Moore was sixth in the two-star 1.45m special two-phase class with Team de Coquerie while, in a similar competition but at five-star level, Derry’s Jordan Coyle, riding Centriko Volo (46.81), was just beaten into second by the USA’s Beezie Madden on Jiva (46.52).

Moore and Team de Coquerie were third in Thursday’s two-star speed competition with Coyle, who was fifth on Essenar Crixus, finishing a place ahead of his brother Daniel on Legacy in the five-star jump-off class.

The feature event of the week at the Palm Beach International Equestrian Center is Saturday night’s $401,000 Lugano Diamonds Grand Prix.

“It was a really difficult track today,” said 19-year-old Foley. “If you wanted to win you had to do something a bit different and go full speed. But Cass made it easy for me as he is naturally very fast. He jumped really well and has a very strong character but has not competed much at this height.

“The Sunshine Tour is a perfect event for him to jump in the bigger classes and get some good results. I plan to jump the Sunday GP classes and I hope to qualify for the Longines Grand Prix but if I feel it is too big for the horse I will change my plans accordingly.”

There was also a win and a third-place finish for Irish riders in the 1.45m jump-off class in Vilamoura, Portugal. Victory went to Kildare’s Mikey Pender riding the 12-year-old Zangersheide gelding Casanova van Overis Z (35.15), which is owned by Studfarm Overis and the Bravo Hughes team, while Co Tyrone’s Jonathan Smyth was third on the Roy Craig and Noletta Smyth-owned ISH gelding Mulvin Lui (38.26). The Irish pair were split by Britain’s Laura Renwick riding Arkuga (35.38).