Round Ireland race set to break records with 26 teams confirmed 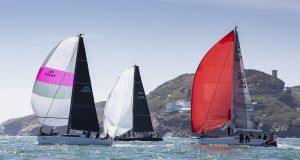 Rockabill VI skippered by Paul O'Higgins (left) is a confirmed entry for the SSE Renewables Round Ireland Race in June. Photograph: David Branigan/OceansportFree for editorial use with picture credit

As sailing’s spotlight continues to swing back towards a sector of the sport sometimes considered as “the lunatic fringe”, evidence that offshore racing is growing in strength is already evident ahead of the main sailing season.

Still with four months remaining to the start, the biennial SSE Renewables Round Ireland Race already has 26 teams confirmed suggesting that the 2020 edition is heading for a record turnout.

A record fleet would be more than 63 boats but with popular divisions such as the two-handed event, and specialist boats such as the Classe 40’s entered, the potential points to upwards of 100 boats.

After a hiatus in 2018 when there were no exotic mega yachts, the 2020 edition will include Telefonica Black, a 70ft speed machine of round the world race fame along with Neptune3, a luxury 26m cruising entry.

Although not strictly part of the Irish Sea Offshore Racing Association (ISORA) programme, the 705 nautical-mile race around Ireland is considered the highlight of the season for its regular members, according to Peter Ryan, ISORA Commodore.

As a breeding-ground for offshore sailing, ISORA prides itself on adapting new innovations to get more people involved and is looking at ways of involving cruising boats in its 2020 programme.

As the alternate year to the 300 nautical-mile Dún Laoghaire to Dingle (D2D) race, the full round Ireland may be too daunting for some crews so the association is encouraging boats to consider the special race for the Royal Cork Yacht Club’s tricentenary in July.

Mirroring the traditional “Kingstown to Queenstown” race route, the more manageable distance of 175 nautical miles is definitely “not a feeder race” according to Ryan who is expecting 26-plus boats on the National YC’s starting line in Dún Laoghaire before sailing southwards to Cobh.

An even bigger fleet is expected for the Royal Ocean Racing Club’s Morgan Cup that will also race to Cork departing Cowes on July 8th; upwards of 300 boats between both events are expected to add to the Cork 300 celebrations and Volvo Cork Week shortly after finishing.

“Offshore sailing has been regarded as the lunatic fringe of the sport but more and more people are getting involved once again,” said Ryan. It will also be an event in the Paris 2024 Olympics featuring a mixed, two-handed class sailing from Marseilles.

With the class to be used yet to be confirmed, the likely size will be around 10m, similar to the Figaro boats used on the coastal short-handed racing circuit.

Meanwhile, the J24 class is consolidating its position as a boat of choice for Under 25 crews by taking up the initiative from the Irish Cruiser Racing Association (ICRA) to discount all entry fees by 25 per cent.

Under 25 crews made up a fifth of the fleet at last year’s J24 national championship and the European Championships 2021 at Howth Yacht Club will also have an U25 category.

1 Keith Duggan: Through the glories and the disgraces, we were all Maradona addicts
2 Rugby Stats: Blame game at lineout time is on the whole team
3 GAA Statistics: Can Cavan and Thomas Galligan beat Dublin with the long kickout?
4 Andy Farrell to delve deeper into Irish squad for team to play Georgia
5 Handful of God: Five magic Maradona moments
Real news has value SUBSCRIBE