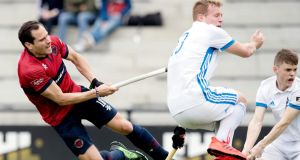 For a second year running, Three Rock Rovers battled hard but found the Euro Hockey League KO8 out of range as they fell to Belgian outfit KHC Dragons in Eindhoven.

For two thirds of the tie, their smart counterattack game unlocked plenty of doors as they fought back twice to 2-2 against the pro outfit who have won four EHL medals.

But Dragons gradually penned Rovers deeper and deeper into their defensive zone and eventually took the game away, finishing 4-2 winners.

Early on, Rovers fell behind when Henri Raes juggled one over the line, just about evading Jamie Carr’s mad scramble across goal.

The Dubliners were level, though, in brilliant style as Mitch Darling stole in ahead of his marker 50 metres from goal and worked a lovely overload with Ben Walker to lay on an opening for Jody Hosking to slash in.

Former Glenanne man Shane O’Donoghue got Dragons back in front from a penalty corner but yet another turnover got Rovers level at 2-2 early in the second half.

This time, Harry Morris nicked the ball off Luke Noblett and found an angle past the excellent goalkeeper Tobias Walter. Mark English and Kevin Mullins also had chances but their opponent soon started to turn the screw.

Florent van Aubel – among a series of World Cup gold medallists on show – turned home a Robbert Rubens cross and then Feliz Denayer scored a penalty stroke for 4-2 with 12 minutes to go.

Rovers did force four penalty corners in the closing minutes but could not get a lifeline.

It sends them into the classification matches on Friday as Ireland’s wait for a KO8 place goes on, which could have an impact on how many places the country gets in next season’s EHL competition.

“First and foremost, to get back to 2-2 from where we were, we are gutted we didn’t kick on from there,” Morris said of the performance.

“There were some sloppy aerials that we let go and gave away which. When you get to this stage for European hockey, those lapses lead to short corners and lead to goals and losses.

“We can take a lot from it and this is where we want to be, competing with the best in Europe, at this stage in the competition to get back here. A lot depends on our next game but we will take positives from this and move on.”