Lisnagarvey on the brink of clinching EY Hockey league title

Three-way relegation battle likely to go down to the wire 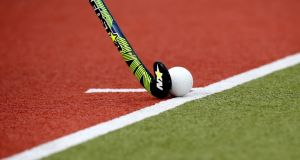 YMCA, Cookstown and Cork C of I are involved in a relegation battle in the EY Irish Hockey League. Photograph: Ryan Byrne/Inpho

Short of Lisnagarvey having an end of season meltdown, the EY Irish Hockey League is theirs. They meet Annadale on Wednesday and finish off the league proper with Annadale again at home on April 27th.

While some clubs have two games remaining before the playoffs and others with just one ’Garvey are still technically vulnerable from Three Rock Rovers, who are four points behind and with two matches remaining.

Yes, all would change if Lisnagarvey lost both and Rovers won both but how likely is that?

Topping the table will qualify the team for the EY Hockey Champions Trophy and also for Europe as Ireland’s representative number two next season. They are joined in the Trophy competition by the next three best-placed teams, currently Three Rock Rovers, Banbridge and Glenanne.

Because of the reconstruction of pitches in UCD and the National Sports Centre in Abbottstown, that competition will take place in Banbridge on May 4th-5th.

Much of the attention in the closing phase will naturally focus on the top but the bottom, where just one point is separating the three clubs, YMCA (11 points), Cookstown (10 points) and Cork C of I (10 points), is shaping up to a tense finish.

Cookstown are in the strongest position to gather points because they have two matches to play, this weekend against Three Rock Rovers and their final game at home to Banbridge. Not easy.

The other clubs have just one with YMCA hosting Pembroke in a couple of weeks and bottom-placed Cork hoping to save the best to last. They face Three Rock Rovers in Garryduff in their final match.

There is a disparity between the sides but as C of I demonstrated when they defeated Monkstown 3-1 last weekend, when they are under pressure, they are a club to respect.