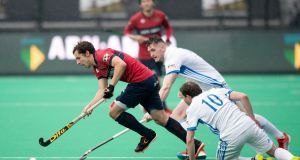 Three Rock Rovers will hope to break new ground on Wednesday afternoon as they bid to become the first Irish club to reach the KO8 stages of the Euro Hockey League.

The Rathfarnham outfit take on reigning Belgian champions KHC Dragons in Eindhoven in the KO16 of hockey’s equivalent of the Champions League.

It is a daunting task against one of the tournament’s marquee clubs who have medaled three times in the last seven years.

Indeed, Rovers lost 20-10 to Dragons last Easter in Rotterdam. It was a scoreline made to look more ridiculous due to the now-scrapped field goals counting double rule.

It was made to look even more unsavoury with the sight of players getting sick at the side of the pitch with nine players struck down by a virus.

Key midfielder Jody Hosking says that, barring more food-poisoning, they will put up a much tougher challenge.

“From when we played them this time last year, it will be completely different,” he said. “They have nine new players, we had nine guys sick last year. Touch wood, we get no stomach bugs again.

“We knew the night before and by breakfast, half our team were struggling. There was a sense of ‘sh*t, we’re playing one of the best teams in Europe, how are we going to do this?’ It got to the point where we wondered would we have 11 people out there.”

This year, they arrive in Eindhoven on a roll, winning 12 games in succession in league and cup, to move within a point of EYHL leaders Lisnagarvey.

Dragons, for their part, had a mediocre regular season, taking the last of the eight playoff spots but subsequently produced their best hockey to beat top seed Waterloo Ducks 4-1 last Sunday.

They feature Irish midfielders Kirk Shimmins and Shane O’Donoghue along with a number of Belgian World Cup winners.

“We’ve seen a few snippets of unbelievable goals that have made it onto social media,” Hosking adds.

“Dragons are a massive club in the EHL; we are under no illusions that it will be extremely difficult but we have put in the extra sessions to be as prepared as possible for it.”

Elsewhere, Lisnagarvey will win the men’s EY Hockey League on Wednesday night should they beat Annadale in their refix at Comber Road.