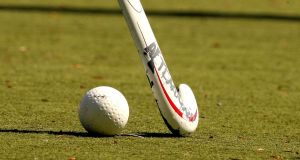 Railway Union’s quest for an Irish Junior Cup three-in-a-row was thwarted by UCD at Grange Road on Sunday, the students withstanding a late rally by the holders to win the final 2-1.

Kate Hennessy turned home Sarah Patton’s cross on 25 minutes to give UCD the lead, an advantage they doubled through a Sara Twomey deflection after the break. Eimear Dolan halved the deficit with 12 minutes to go, but despite ceaseless pressure in the closing stages, Railway could not force an equaliser.

On Saturday, Church of Ireland came from two goals down with just 24 minutes to go to beat Greenfields in the Irish Hockey Trophy final at Serpentine Avenue. Alacoque McGovern and Meabh Holden had given the Galway side a 2-0 lead at half-time, but second half goals from Hannah Honner (two), Kay Gaffney and Kirsty Coombes turned the final around for the Cork team.

Earlier in the day at the same venue, Chelsey Whan swept home a penalty for Down’s Dromore to give them a 1-0 victory over Clonmel in the Irish Hockey Challenge final.