Cycling can be tough, but will never be as hard as running

Mark Cavendish’s injury shows the risks on the bike, but running is a different level 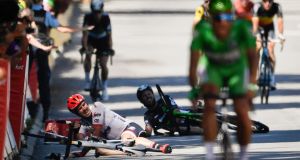 Germany’s John Degenkolb and Great Britain’s Mark Cavendish lie on the ground after falling near the finish line of the fourth stage of the Tour de France on Tuesday. Photograph: Jeff Pachoud/AFP/Getty Images

There are six steel screws and a five-inch titanium bar where my left collarbone used to be. There’s a piece of bone floating beneath my left kneecap and what looks like a fresh bite mark down the back of my right calf muscle.

Just some of the small souvenirs from those moments my bike suddenly fell from under me, or indeed over me. And I go cycling for the sheer pleasure of it. For those who actually race their bikes for a living the risks are and always will be heaped beyond any reasonable doubt.

All these campaigns to increase an awareness of road safety for cyclists can’t come fast enough, and then you switch on the Tour de France and realise some things will never change. Less than a week into the race and enough carnage already to take out the two top sprinters, leave several others with one less layer of skin, including Chris Froome, and at least one riding on despite concussion (take a silent bow, Tony Martin).

Even if they don’t have to contend with Luas tracks, these riders know the hard lines, which made Peter Sagan’s disqualification after Tuesday’s Stage 4 into Vittel feel strangely contradictory: whatever about any intent in taking out Mark Cavendish – and by all accounts there was none – the miracle here is that Sagan also managed to stay upright (that and the fact Cavendish sustained nothing worse than a fractured right shoulder blade).

Sagan’s manoeuvring was nothing worse than our own Seán Kelly performed in his prime, and if the Tour organisers are hoping the Slovakian’s disqualification might raise some awareness for safety in these bunch sprints then good luck.

It was definitely hard on Sagan, as if this Tour isn’t hard enough already: some have suggested it may be softer than other years, because it features only three true mountain-top finishes, and bypasses iconic climbs such as Alpe d’Huez and Mont Ventoux, where 50 years ago next Thursday, Tom Simpson collapsed and died 1.5km from the summit, having just consumed a fatal combination of amphetamines and brandy.

Yet this weekend’s venture into the Jura region – especially Sunday’s Stage 9 into Chambéry – has the potential to cause carnage in another sense, featuring some of the hardest climbs ever used in the Tour, such as Mont du Chat, where every rider will be  “majorly suffering,” as Kelly himself likes to say.

And for all its dark and perhaps still cynical days of doping, there is something enduringly fascinating about the raw hardiness of professional cycling, the undeniable bravery of its riders. Given the spotlight that comes with it, the Tour must rank as the hardest event on the sporting calendar – although that doesn’t necessarily make it the hardest sport.

Because I know that gets argued quite a bit among athletes, especially distance runners, and possibly even between Dan Martin and his wife Jess, who ran the 10,000m at the Rio Olympics for Great Britain last summer.

They’re re probably nice about it, suggest their sports are equally hard, but there is a pain barrier associated with running which for practical reasons alone can never apply to cycling: when riders reach that point (or rivet, as they say) there is always a saddle and handlebars to rely on; when runners reach that point they can rely on nothing except the strength of their own will.

There’s a gentle reminder of that in an interview Ray Flynn gives to this month’s Irish Runner magazine, to mark the 3:49.77 mile he ran in Oslo on this day 35 years ago, still the Irish record. Flynn talks about feeling physically sick and “worryingly incoherent” in the aftermath of that run, and for good reason. The only people who can understand the pain barrier associated with running a sub-3:50 mile are the ones who have broken through it.

“But I never once thought the record would last that long, and it’s a surprise it still stands,” Flynn told me, and that was back in 2004; that it still stands in 2017 can be partly explained by the idea that for all the training gadgets these days, athletes definitely raced harder back in 1982.

Even if the myth behind the sub-four mile was already broken by then – in 1954, remember, there were those who believed Roger Bannister might actually die trying – that pain barrier remains, and not just in the mile. Seb Coe has often spoken about the unforgiving nature of championship 800m running – “I’ve likened it to the killing zone” – and it also helps explain why the first sub 13:00-minute 5,000m of the season was only just run in Lausanne on Thursday night.

Or take another Irish record, Mark Carroll’s 7:30.36 for 3,000m, set in Monaco in 1999. Carroll certainly knows the pain barrier involved in that run, because no other Irish runner has come close, another pointer perhaps towards the extreme that it is.

It’s possibly not a fair comparison, although I know there are a lot of runners who have taken to cycling after their careers have finished, for the simple reason it’s not as hard. A few of my former college team-mates are still competitive amateur riders in America, even at their softer age.

Actually we suggested buying a bike for my dad for his 80th birthday, next Wednesday. Even if his memory is still razor sharp, he is getting a bit wobbly, and those laps around UCD aren’t run as hard as they once were.