‘I tried everything but my body wouldn’t allow it . . . I’d like to apologise to the fans’ 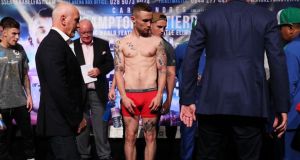 Carl Frampton on the scales during the weigh-in at the Europa Hotel, Belfast. Photograph: PA

Carl Frampton has apologised to fans after he weighed in one pound over the featherweight limit for Saturday’s fight with Andres Gutierrez at the SSE Arena in Belfast.

Frampton weighed in at 127lb on Friday, while his Mexican opponent recorded 125.6lbs, and though the fight will still take place it will no longer be a WBC title eliminator for Frampton. If Gutierrez wins he will still meet the WBC champion Gary Russell Junior as a mandatory challenger for the belt.

Having failed to make the weight, that is not now an option for Frampton, who posted a statement on Twitter registering his disappointment.

“After a long training camp of intense preparation and trying to make weight, I was disappointed that I came in 1lb over the featherweight limit today,” he said. “I tried everything I could to cut down, but unfortunately, my body just wouldn’t allow it in the end.

“I’m gutted, but at the same time, I acknowledge that I am responsible. I’m still very much looking forward to returning home tomorrow night in front of the best fans in the world. I am sure that I will put on an explosive performance and claim victory. Thanks again to the Jackal Army - the turnout today was unbelievable.”

Saturday’s fight comes at the end of Frampton’s six-month lay-off that followed his first professional defeat to another Mexican, Leo Santa Cruz, in Las Vegas.

Frampton is keen to face Santa Cruz for a third time, or to challenge Wales’s IBF champion Lee Selby, so it is even more significant that his trainer Shane McGuigan has said the “finish line” for his career is in sight despite only 24 professional fights.

McGuigan, speaking to the Irish media before the Gutierrez bout, said: “We feel Saturday night is the next chapter in Carl’s career and one I’m excited about, because we can see the finish line now.

“It’s like running a marathon and you can see that 20-mile mark and you’ve got around six miles to go. The legs are a bit heavy but we’re going to finish strong with four or five big wins.”

McGuigan, 28, recently stopped training the 36-year-old David Haye amid suggestions he had encouraged the heavyweight to retire, but he has worked with Frampton for significantly longer.

“If I don’t win this next fight, what do I do?” Frampton added. “So I’m determined to win this fight and then we’ll think about the future after that.”

Gutierrez, who has lost one and drawn one of his 37 fights, said: “I’ve been waiting for this (chance)for many years. I’m not going to let it pass.”