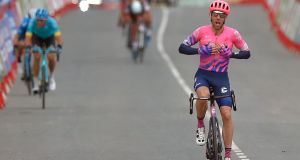 Canada’s Michael Woods celebrates as he crosses the finish line to win stage 7 of the Vuelta a España from Vitoria-Gasteiz to Villanueva de Valdegovia. Photograph: Ander Gillenea/AFP via Getty Images

It came down to the equivalent of a middle distance kick in which case there could only be one winner, Michael Woods once again doing on his bicycle what he first learned on a running track.

The comparison may only be moot but when the stage 7 finish of the Vuelta a España was reduced to five riders on the final approach to Valdegovia it was Woods, who once ran the mile in 3:57.48, who showed he had the legs and tactical nuance to take the win, the 34-year-old from Canada adding to his first Grand Tour stage win in Spain from two years ago.

It made for an exciting little skirmish among the five riders who broke away on the ascent off the final climb at Puerto de Orduña, with just under 20km of flat racing to go, only none of it had any great bearing on the immediate battle for the general classification.

Richard Carapaz from Ineos Grenadiers retained his leader’s jersey, the Ecuadorian rider holding his 18-second advantage over Britain’s Hugh Carthy, a team-mate of Woods at EF Pro Cycling, with Ireland’s Dan Martin still in third, 20 seconds in arrears, after that leading trio all finished in the group 56 seconds down. Defending champion Primoz Roglic from team Jumbo-Visma remains in fourth, 30 seconds back, still in the green jersey.

“I was able to sit in a bit, because we had Hugh Carthy in the peloton, then had a bit of luck, had the legs, and managed to get the win,” said Woods, who already made cycling history last year as the first sub-four minute miler to also finish the Tour de France. Distance running was his preferred sport up to age 25, his 3:57.48 run at age 18 still the fastest mile run by a Canadian on home soil, before a series of foot injuries forced his switch over to pro cycling.

The only real gain inside the top 10 was for Alejandro Valverde from team Movistar, who took second on the stage and gained 52 seconds, moving up one place into ninth, while Guillaume Martin of Cofidis takes over the king of the mountains jersey, finishing fifth on the stage.

“Today was the type of day where it’s easy to lose concentration, make mistakes, but we again did a good job,” said Martin, who will be joined next year at Israel Start-Up Nation by Woods.

“The boys kept me in the front and most importantly in position for the technical descent before the final climb. I stayed focused and just watched how the other GG guys rode on the climb, trying to save as much as possible for Wednesday’s stage. It was again cold and grey day which saps the energy but I felt good at the end and stayed concentrated till the finish. So another good day behind us.”

Sam Bennett also preserved as much energy as possible ahead of the next two flat stages to come on Thursday and Friday, finishing the day in the second main group, 16:58 down in 157th place. There’s another proper mountain stage to come on Wednesday’s stage 8, the 165.4km from Logroño to the top of the Alto de Moncalvillo, extremely steep in parts.

Martin and company will be aware of the chances that stage offers in the battle for the GC, which may explain when they kept their powder dry for this stage, happily for them a little drier than Sunday’s finish onto the Formigal. Some comfort for now.