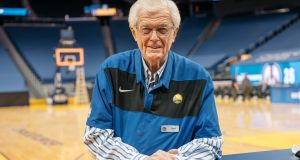 Fred Kast, the official scorer for the Golden State Warriors, at the Chase Center in San Francisco. Photograph: The New York Times

Fred Kast has seen plenty of basketball in his 57 years as the official scorer for the Golden State Warriors — some good, some bad, some amazing. After Stephen Curry scored 62 points for the Warriors on Sunday night, Kast got a telephone call on Monday morning from one of his closest friends.

“You know, after every basket that Curry made, I could hear him shouting, ‘Thank you, Fred!’” Kast recalled his friend telling him. “He was pulling my leg.”

Kast, who will turn 82 this month, has recorded every field goal, every free throw, every foul and every timeout in nearly every Warriors home game since 1963-64. He jots the stats into an NBA-issue, spiral-bound notebook that goes to the league office at the conclusion of each season.

In a league that has seen its share of technological advances, the official scorer — the person who logs each game’s most vital elements — is a throwback, and every team has one. Somewhere in the NBA archives, there is a small library of Kast’s handiwork.

Kast has refined his craft through about 20 coaching changes, 23 playoff appearances and four championships, manning the scorer’s table at no fewer than six arenas, including the Cow Palace, the San Francisco Civic Auditorium and Oracle Arena. But nothing lasts forever, and Kast is set to retire after the Warriors’ game against the Los Angeles Clippers on Friday night.

As the news began to circulate among his friends and colleagues this week — Kast wanted to keep it quiet — they tried to register what it meant.

“It’s a shock to the system,” said Brett Yamaguchi, the team’s longtime senior director of game operations. “He’s been such a part of the fabric of Warriors basketball.”

Kast had not planned on stepping away this season, but disruptions caused by the coronavirus pandemic made him realise that it was time. Staff members who sit at the scorer’s table this season need two virus negative tests, collected 24 hours apart, in the three days before a game. That means Kast sometimes must make an extra three-hour round trip from his home in San Jose, California, so that he can be tested at the arena.

“And my night vision isn’t what it used be anyway,” Kast said.

The pandemic has been difficult for him in other ways. His wife, Nita, is ailing and lives in a skilled nursing facility. Because of coronavirus protocols, Kast has rarely been able to see her, he said, and when he does, it is through panes of glass. They have been married for 41 years.

“If I could change places with her, I would gladly do it,” said Kast, who has two stepchildren and three grandchildren.

Ahead of retirement, Kast has kept busy, working three home games already this week. He will be replaced by Kyle McRae, who has spent 30 years as a Warriors statistician. Kast has been tutoring Kevin Chung, who will assist McRae, providing Chung with copies of his work from a few recent games so that he could study them — and a couple of blank pages so that he could practice on his own.

“The game is not going to stop because you don’t record something right,” Kast said. “It’s not an easy thing. But it becomes easier the more you do it.”

Before he became the NBA’s executive vice president of basketball operations, Kiki VanDeWeghe was a high-scoring forward whose own stats were documented by Kast on multiple occasions.

“He helped set the model for how to do the job of official scorer at a high level,” VanDeWeghe said. “I’ll miss seeing him in his seat at centre court.”

Growing up in Rahway, New Jersey, Kast may have gotten his basketball genes from his mother, Marie, who played a half-court version of the game as a young woman. His father, Fred, worked at a brokerage firm on Wall Street and kept his car in a garage that had a basketball hoop nearby.

“So I would go shoot hoops while my dad was washing his car,” Kast said.

Kast was predisposed to the game for one other reason: He was tall. By the time he reached high school, he was nearly 6-foot-6 and a promising low-post presence. He eventually left for Duke on a basketball scholarship, helping the team win its first Atlantic Coast Conference championship. He also had a memorable matchup with Jerry West, who was then starring for West Virginia.

“I think he scored something like 30 points in the first half,” Kast said, “which gives you some clue as to how effective I was on defence.” (Kast was being somewhat modest; West scored only 29 points in that game.)

After graduating, Kast left for California to work in sales for a medical supplies company. As much as he loved the game, he thought his only connection to basketball moving forward would be as a fan. He was about to stumble into a part-time job that would keep him closer to the action than he could ever have imagined.

“Just unknowingly being in the right place at the right time,” he said.

In the fall of 1963, not long after relocating to the Bay Area, Kast bought a ticket to watch the Warriors — and Wilt Chamberlain, whom he had once met at a summer basketball camp — at the Cow Palace, the arena that was housing the team after its cross-country move from Philadelphia. Before Kast reached his seat, he bumped into a college friend who was working at the scorer’s table. The friend asked Kast if he would be willing to help.

“Sure, I’d be glad to do that,” Kast recalled telling his friend. “Where would I be seated?”

“Right at midcourt,” his friend said.

Kast said he became the team’s official scorer later that season. For four seasons, he commuted from Sacramento, battling late-night fog on his 90-mile drive home. After he retired from his sales job of 37 years in 1999, he continued scorekeeping, a gig that he treated with painstaking professionalism.

“Well, I’ve been that way with everything that I’ve done,” he said. “My view is, if you’re going to do something, do it right or don’t do it at all.”

Yamaguchi, who is in charge of non-basketball entertainment for the team, got a sense of Kast’s meticulous nature when he sat next to Kast at the scorer’s table in his early days on the job. They made an odd pair. While Kast sat with his pad and pens, Yamaguchi supervised “all the craziness,” as he put it.

“Fred is such a purist,” Yamaguchi said, “and I just remember hearing, ‘Hey, can you turn down that music?’ And I’m like: ‘OK, Fred! Definitely!’”

People who get jobs on the scorer’s table for the Warriors tend to keep them. Jim Maher has worked for the Warriors in various capacities for over 50 years, most recently as their game-clock operator. Lori Hoye has been the team’s chief statistician since 1989, and now leads a four-person crew that tracks in-game stats on a computer system.

Hoye, 61, has long worked closely with Kast, whose scorebook is the official record and whose penmanship is precise. (“What happens if the computers break down?” Kast said.) He uses two pens: a black one to take notation in real time and a red one to compile totals at the end of each quarter.

“We’re all trying to make sure we have the same numbers,” Hoye said. “Coaches get in your way. Players get in your way. And we’re always trying to figure out the refs’ fingers when a foul is called. The worst thing is to have players with the Nos. 45, 54 and 9 on the court at the same time.”

She laughed and added, “It’s not going to seem real when Fred isn’t here.”

Kast will continue to watch the Warriors from home — and “Dancing With the Stars,” one of his favourite television programs. In some ways, it might be easier for him to enjoy the team’s theatrics now that he no longer needs to pay close attention to his work. He marvels at the speed of the modern game, and at the skill of players like Curry.

“His shotmaking ability is uncanny,” said Kast, who never thought he would have a front-row seat for so long.

He is grateful that he had one at all. - New York Times