The IOC awarded the 2024 summer Olympic Games to Paris and the 2028 edition to Los Angeles following a vote in the Peruvian capital of Lima. Video: Reuters 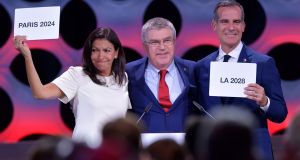 Paris was awarded the 2024 summer Olympics and Los Angeles was handed the 2028 edition on Wednesday, as the International Olympic Committee (IOC) broke with decades of tradition to vote on a unique double allocation.

Paris, which has hosted two previous Olympics, will stage the event 100 years after its last Games in 1924 while Los Angeles will also organise its third Games after 1932 and 1984.

There were no other candidates for either the 2024 or 2028 Games and the votes, held at an IOC session in the Peruvian capital Lima, were a formality.

IOC president Thomas Bach embraced both cities’ mayors on stage after a unanimous show of hands by IOC members ratified the awards.

“This is a wonderful moment for the people of Paris and France and also the Olympic movement,” the co-chair of the Paris bid Tony Estanguet said.

“The Games are coming to Paris for the first time in 100 years and we will deliver an amazing celebration of sport at the heart of one of the world’s greatest cities.”

The IOC decided in July to award both Games at the same time, following the withdrawal of four of the six cities bidding for the 2024 Olympics, amid concerns about the size, cost and complexity of organising the world’s biggest multi-sports event.

Los Angeles then dropped its bid for the 2024 Olympics, for which it had been campaigning for over two years, in return for receiving the 2028 edition.

“This is a momentous day for the people of Los Angeles and the United States,” said LA mayor Eric Garcetti. “For the first time in a generation, we are bringing the Games back to the City of Angels.”

“LA loves the Olympics because the Games have lifted up our city twice before.”

The presence of French president Emmanuel Macron, who also spoke on Wednesday in a video message, at the IOC’s extraordinary session in July in Lausanne was seen as crucial in sealing the deal for the French capital for 2024.

The LA Games, with a budget of €4.5 billion, will essentially follow the plan they had in place for 2024, including housing athletes at the UCLA campus.

It is the first time the IOC has awarded a Games 11 years in advance, as it traditionally gives the next Olympic host city seven years to prepare.

The Olympic body, however, was eager to secure the future of its prime product after Boston, Budapest, Rome and Hamburg all pulled the plug on their 2024 bids mid-race, fearing high costs and local opposition, leaving just Paris and LA to battle it out.

Bach, who said the double allocation was a “win-win-win” deal, added that the unanimous decision would secure the future of the Games and ensure successful Olympics.

Both the 2014 winter Games in Russia’s Sochi and the 2016 Rio de Janeiro Olympics were mired in controversy over corruption, embezzlement and doping allegations, dealing a major blow to the reputations of the event and the IOC.

Tokyo, the host of the next summer Games in 2020, has also had to fend off allegations of corruption regarding the decision to award it the Games four years ago.

Amber Barrett hoping hard work will pay off with Ireland 06:44
West Ham ‘really disappointed’ after win over Leeds, says Moyes 06:28
Jamison Gibson-Park embracing life as the main man 06:00
Games remain on hold as the GAA wait for word from the Government 06:49
Ireland’s Jack Byrne embracing life in the Cypriot sunshine 06:46