T-Mobile Arena is a 20,000 sell-out for meeting of the two middleweight fighters 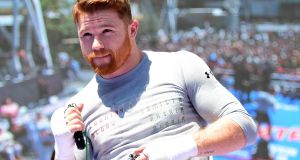 Canelo Alvarez prepares to jump rope during a media workout in Los Angeles ahead of his middleweight fight with Gennady Golovkin. Photograph: Harry How/Getty Images

It is time for boxing to fix its house. Two weeks after Floyd Mayweather and Conor McGregor did each other a mutual favour in a cross-discipline public spar that delivered them an estimated $400 million to share (the Irishman getting a quarter slice), Gennady Golovkin and Saul “Canelo” Alvarez meet in the same ring on Saturday night to decide who is the best middleweight in the world.

It is almost just like the old days. So outstanding are they, and so evenly matched are their skills – Golovkin the walk-forward concussive hitter, Alvarez the dangerous counter-puncher – that the 20,000-seater T-Mobile Arena is sold out. Two Saturdays ago, when punters rebelled at the grotesque asking price of even the cheap seats, it was not. That was a worldwide pay-per-view stunt; this will reach a global TV audience as well, but it is a legitimate fight, the sort of world title event that should occur more regularly in a perennially anarchic business.

“I’m very happy, fighting soon in a couple of days in Vegas,” Golovkin said on Tuesday in his halting English. “Too much talking. Before, why not, but last couple of weeks my focus is boxing. I wanna fight. We’re both professional athletes. He’s not a crazy guy. We feel very comfortable. I’ve wanted this fight for a long time, three years.”

His chief frustration is that the fight should have been made a long time ago. The situation resembles the five-year wait fans had to endure for Mayweather to agree to meet Manny Pacquiao – and the inevitability of the eventual fight being a disappointment.

“I know him a long time,” Golovkin says of Alvarez. “He’s been inside the same weight the last couple of years. He [could fight] anybody. I want this fight since [Alvarez beat Miguel Cotto for the WBC middleweight title in November] 2015. I was in the mandatory position.”

Alvarez instead defended against and stopped Amir Khan, then Liam Smith. Golovkin, meanwhile, entertained Kell Brook, then had his toughest night in a while last March before beating Daniel Jacobs to keep his unbeaten record intact. But it has been the Mexican’s team (rather than the fighter) who have procrastinated, claiming he was not big enough for Golovkin.

Six years ago, Alvarez beat Matthew Hatton and Ryan Rhodes back-to-back at light-middleweight; the suggestion that he has not moved up because he is not big enough is palpable nonsense. When he knocked out Khan at an agreed 155lbs, he entered the ring a day-and-a-half after the Friday weigh-in 35lbs heavier than the British challenger. In May, he outpointed Julio Cesar Chavez at super-middleweight and, face to face, he looks rock solid at 160lbs.

The man Golovkin blames for the delay is Oscar De la Hoya, the promoter. But the former six-weight world champion does not see it that way. He reckons Alvarez has grown into the weight and now is the perfect time for them to meet.

There are many who suspect De la Hoya has dragged his feet to allow Golovkin to get a little older, a bit slower, more vulnerable. At 34, Golovkin is seven years older than Alvarez, even though the busy Mexican, who started boxing for money at 15, has had 51 fights: one more than the 41-year-old and newly retired Mayweather – and, more surprisingly, 14 more than the smiling Kazakh.

Whatever the reason for the wait, this is the most equal match-up out there, in nearly any division, and the most eagerly anticipated. Nobody in either camp is talking with the sort of brash certainty familiar to the industry. The fighters respect each other and they want to settle their argument without unnecessary fuss.

Golovkin was not worried about being acclaimed as the best, pound-for-pound, in his sport. “There are so many great boxers, different styles.” It is his first fight in Vegas, but that is not a consideration for him, either. “Vegas, New York . . . It’s just another ring.”

He agreed, though, that this could be a, “history fight’, one to set alongside the memorable middleweight matches of the past, with Marvin Hagler against Tommy Hearns invariably flagged as the most exciting war of the modern era. Golovkin says he watched those two wonderful fighters, along with Sugar Ray Leonard and Roberto Duran, on TV, when he was a small boy in Kazakhstan.

“I’m old school: just one champion. Four champions? No. This is the first step,” he said, referring to their journey along that road to greatness. “I believe we will have a second step, a second fight, maybe more.”

At the moment, Golovkin is the man. Regardless of who wins, if the fight lives up to expectations, Golovkin’s desire for a trilogy with Alvarez will be a reality. What a prospect that is.