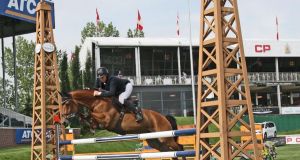 Ireland’s Jordan Coyle recorded his fourth five-star success in a row on the Elan Farm-owned Picador when landing the Lafarge Cavalry Charge 1.50m speed class in the Spruce Meadows summer series in Canada on Sunday.

The Derry native and the 12-year-old Anglo European gelding crossed the line in 75.67 seconds to win ahead of the USA’s Beezie Madden on Jiva (75.96). Coyle’s younger brother Daniel placed third on his own Irish Sport Horse mare CHS Krooze (76.97), a nine-year-old by Kroongraff, and finished fourth with Lothlorien Farm’s Farrel (78.97).

In the young horse classes at the Canadian show, Daniel Coyle won the 1.40m final for seven-year-olds on Lothlorien Farm’s Dutch Warmblood mare Amalia (59.99), with Jordan placing fifth on Celtic Park LLC’s Centriko Volo (66.75), while, in the 1.45m final for eight-year-olds, James Chawke had to settle for fourth (61.93) on Stonepine Stables’ Grasshopper as Willis took the honours on Wellington Grandorie (59.72).

In eventing, England-based Irish international Fred Scala finished sixth in the CCI4*-S at Barbury Castle with his own 10-year-old Ars Vivendi gelding, Corriebeg Vivendi when completing on a penalty score of 46.4. New Zealand’s Andrew Nicholson won the 86-runner class with the Irish Sport Horse gelding Swallow Springs (33.8), an 11-year-old grey gelding by Chillout.

Nicholson landed Section B of the CCI3*-S class on the Spanish-bred As Is while in-form British rider Piggy French won Section A on the ISH gelding Brookfield Quality, a 10-year-old OBOS Quality 004 gelding.