Sport better placed after 2020 – the Year of Speaking Out

From Marcus Rashford to LeBron James, there is a welcome ‘new normal’ in sport 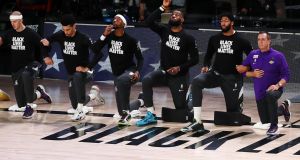 One of the clichés of 2020 has been “the new normal”. Given a happier 2021, its relevance is likely to get mostly flung aside with relief. Apart from sport that is. Sport has found out too much about itself this year for any cosy return to the status quo. It will be all the better for it too.

If you doubt horizons and expectations have shifted then think back just a couple of years to that infamous piece of advice to LeBron James from the Fox News host Laura Ingraham – “Shut Up And Dribble.”

Just four words, but the ugly undertones lurking within them summed up a prevailing contemptuous attitude towards any high-profile sporting figure who dares stray beyond the business of winning and losing.

Over the years variations on the theme have been flung at people such as Jackie Robinson, Muhammad Ali and Martina Navratilova. The not so subtle sub-text is a reminder to athletes to supposedly know their place.

And it’s true that just because someone can hit a ball, land a punch or serve an ace it is no qualification in itself to pitch their oar into social and political issues. But they shouldn’t be a barrier to expression either.

In 2018 a media mouth didn’t hesitate to stamp on one of the finest basketball players ever to step onto a court. In just a couple of years such a reflex dismissal has been transformed from not only sounding ignorant but idiotic.

A dire year of political and social upheaval has seen sport discover its voice and its power.

Most obviously the quiet eloquence of taking a knee has been a global symbol of defiance against racism. Some of the most powerful images of that opposition gained expression through athletes like LeBron James having the courage of their convictions and speaking out.

Sickened by institutional violence of a sort that saw George Floyd’s life slip away during the eight minutes and 46 seconds a police officer’s knee was on his neck, NBA players took the lead for many when simply declaring enough is enough.

If the impact of Floyd’s killing swept around the globe because it was documented on camera phone, then the ease of direct communication social media facilitates framed the response.

Those who dismiss taking the knee on the basis that racism is still virulent simultaneously expect too much of the gesture and appreciate the power of its significance too little. But 2020 has crystallised sport’s capacity to be both a sweeping advocacy platform and a vehicle for individual small victories.

Marcus Rashford’s achievement in getting the British government to back down and do the right thing on free school-meals was one such example.

An arrogant administration got faced down by the Manchester United and England striker on a single, simple to understand issue. That the authorities took so long to realise what they were up against only amplified how ham-fisted their response was on a transparently unwinnable topic.

Rashford had right on his side and a profile recognisable to millions. Crucially he also had the will to pursue the issue. It’s a combination to reckon with and the implications of his success are considerable. This is proof of how a sporting platform can yield tangible results.

It has also confirmed just how powerful the platform top athletes possess can be, and how a willingness to speak out means they will at least get heard. Inevitably responses to what’s said are largely dictated by whether you agree with it or not.

Controversy over whether or not the Margaret Court stadium in Melbourne should be renamed due to the former tennis champion’s views on same-sex marriage and transgender athletes served to remind how the principle of free-speech is tied up in having to hear objectionable views sometimes.

But willingness to express views wider than just winning and losing is at least better than corporate pandering to the most lucrative sponsorship deal, a trait famously embodied by Michael Jordan’s snappy but cynical line about how “Republicans buy sneakers too”.

Jordan used his profile to make spectacular amounts of money. His successor as the face of the NBA, LeBron James, isn’t short of a buck either. Neither is the soccer player Megan Rapinoe who has become an iconic figure due to her preparedness to be outspoken.

They are emblematic of a new generation of sporting figures prepared to employ their profile for protest and not just financial profit.

The trend shouldn’t be immune to scepticism. Plenty are always prepared to jump on any bandwagon that might boost their own image. There are always opportunists ready to acclaim something as the new rock ’n’ roll.

Neither should it be forgotten that the game no one’s allowed not play is just a different kind of tyranny.

However, the sincerity of someone like Rashford is instantly recognisable. So is the attraction of elite sports stars to young people generally, a generation whose belief in the political process is severely, and understandably, compromised. Now there’s the capacity for both to communicate directly.

The potential of that reach shouldn’t be lost on anyone, not least sports people themselves.

Maybe disillusionment will come in future. But on the verge of a New Year, athletes are in the powerful position of being heeded when employing moral arguments that automatically sound clichéd in the mouths of professional politicians.

Disillusionment with such figures has been the prevailing theme of our times. The kneejerk reaction to it has served to only make the atmosphere more poisonous. It has prompted many to close their ears to the din of so much yelling for the sake of making noise.

It puts those with enough recognisable integrity to still capture an audience in an enviable and valuable position. At the very least it promises to be one “new normal” set to stick in 2021.