Serena Williams has a golden opportunity amidst US Open Covid chaos 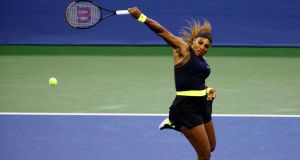 The US Open starts today. For the next fortnight what is normally a heaving mass of humanity in Flushing Meadows in New York will be a historic behind-closed- doors exercise in grim perseverance. A successful outcome to the first tennis grand slam for seven months will be to just get it over and done with.

No amount of marketing spin can disguise how fraught this is. In a city touched more than most by coronavirus many will view it as a tone-deaf exercise in dangerous escapism. Invited to help treat it as a defiant gesture, enough of the world’s top players have voted with their feet and judged the risk too great to travel.

So not only is this a Slam without raucous crowds but the depth of competition has also been hollowed. Those prepared to play must realise too that the chore of living with health protocols is nothing compared to the wider context of a country not only fighting Covid-19 but also seemingly at war with itself.

In such a parlous environment, this iconic event has rarely if ever seemed more inconsequential. Yet there still lurks a storyline for the ages. Serena Williams has in her sights the sort of sporting history to make the outcome of a tennis championship seem a lot less frivolous than it might otherwise be.

Ordinarily the build-up would be dominated by whether or not Williams finally secures a record-equalling 24th grand slam singles title. But in a championship where the priority is to just get it done, the saga of whether or not perhaps the finest tennis player of all can finally match Margaret Court’s slam record feels apt.

It will be a stunning feat should she manage it. How Williams, and her sister Venus, overcame all obstacles and odds to dominate tennis is already assured of a singular space in sporting history. If it is fundamentally a two-handed story then in recent years the younger sibling has dominated. And 21 years after her first US Open victory it is firmly all about her now.

Just a few weeks from turning 39, and just a few years after becoming a mother, this pioneering figure has it within her grasp to cement status into statistical fact.

Considering the breadth of Williams’ career it is an astonishing achievement in itself to be among the favourites to win a record seventh US Open. One thing even her harshest critics have never ultimately been able to question though is her perseverance.

Williams will never get a better chance than this

It is why Williams was always going to return to the game and try to wrap up unfinished business. When she won a 23rd grand slam title at the 2017 Australian Open it was widely assumed that equalling, and eventually surpassing, Court’s record was all but inevitable. Since her return Williams has been a woman on a mission to get it done. And the bottom line is that she hasn’t managed it.

There have been four Slam finals, two at Wimbledon and two at Flushing Meadows. For all of them Williams was favourite to win. She came up short every time. At last year’s US Open she somehow conspired to lose to the Canadian teenager Bianca Andreescu. The year before an infamous row with an umpire contributed to defeat against Naomi Osaka.

In all four finals the hand of history has appeared to weigh very heavily indeed. The great champion, desperate to get over the line, has looked like wanting it to the point of wanting it too much. At times it has been wincing to watch. It is what will make watching her progress over the coming days such a riveting psychological drama no matter how unique the circumstances.

Williams will never get a better chance than this. Six of the world’s top eight ranked players won’t play. They include the top two, Ashleigh Barty and Simona Halep. Karolina Pliskova is top-seed. The Czech has never won a slam. Osaka is there again. So is the teenage prodigy Coco Gauff. But really it’s all about Williams.

She vehemently denied losing her nerve when beaten in the third round of the Australian Open last January. That most dreaded of sporting accusations - choked - got thrown around on the back of that. It seems an absurd accusation to level at such a great champion. But when even John McEnroe says so, it can’t be just swatted away like weak bad drop-shot.

It being Williams such criticism comes accompanied by any amount of broader commentary. But at face value protesting at the suggestion she has choked when it counted smacks of protesting too much. Expectations, none more than her own, do appear to have weighed her down. Even allowing for being at the tail-end of her career it is hard to credit four final losses like that otherwise.

However the fact everything has been turned on its head changes things. Rather than a depleted field perhaps the biggest impact of Covid-19 on Williams’ tilt at history might be more perspective. She herself has pointed out how so much of the game is mental. Such a bright character can’t be unaware of how relatively minor a matter tennis is right now, and how freeing such a realisation can be.

The very fact circumstances will be different could be crucial. If the men’s No. 1 Novak Djokovic, hardly a wildly popular figure at the best of times, but especially so after the Adria tournament debacle in June, might not notice the absence of spectators, then Williams usually feeds off crowd energy like few others ever have.

It can be a two-edged sword however. Fighting to quell doubts and anxieties is tough enough. Having to do so in front of thousands can be an oppressive experience. Then again being left alone with your own thoughts can be no picnic too. But for the player who has done and won everything, the novelty of this US Open might ultimately prove liberating enough to get the job done.