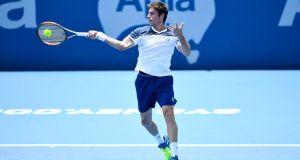 Enrique Lopez Perez has been banned from tennis for eight years for his involvement in match-fixing activities. File photograph: Getty Images

Spanish tennis player Enrique Lopez Perez has been banned from the sport for eight years for his involvement in match-fixing activities in three separate instances in 2017, the Tennis Integrity Unit (TIU) said on Tuesday.

“The disciplinary case was heard by anti-corruption hearing officer Richard McLaren on November 5th 2020,” the TIU said in a statement.

“He found that Enrique Lopez Perez breached the rules of the Tennis Anti-corruption Programme three times at tournaments in 2017, with two further charges unproven.”

Perez was provisionally suspended in December, 2019, and will not be able to attend or play in any sanctioned tennis event for the next eight years.