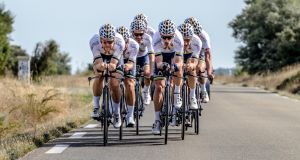 The Aqua Blue Sport riders in team time trial formation prior to Saturday’s start of the race. Photograph: Karen Edwards. 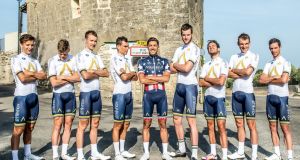 The Aqua Blue Sport Vuelta a España selection in Nîmes, France, prior to Saturday’s start of the race. Conor Dunne (fourth from right) will become the 15th Irish rider in a Grand Tour. Photograph: Karen Edward

When Cork businessman Rick Delaney laid out his goals for his new Irish pro cycling team last autumn, taking part in one of the sport’s three week Grand Tours was one target. It was a lofty ambition for a new team, and something that would rely on a wildcard invite from the race organiser.

Some within the sport were unsure if that was realistic for year one but, sure enough, the Vuelta a España (Tour of Spain) revealed in March that his Aqua Blue Sport team would indeed participate.

Fast forward five months and Delaney’s squad will make history on Saturday. When the Monaco-based squad rolls out of the start house in Nîmes, France, to begin the 13.7 kilometre team time trial, it will be a huge moment in Irish sport. In the 114 years since the first three-week race was held, no Irish squad has ridden a Grand Tour. That is about to change.

“It means everything,” Delaney said on Friday, referring to that stat. “It is a great honour. It is a dream come true. This time last year it was an idea, and 12 months later we are here. It is fantastic.

“We went on a recon ride of the team time trial circuit this morning. And to see the fans out with the cameras and camera phones taking photographs, and the journalists and just the razzmatazz – it is very special. It is a bit surreal. Very much so.”

Delaney is 49 years of age and comes from Turners Cross. He has property interests but says that the core of his business is alcohol distribution via the Aqua Blue company. That has been a big success and saw him relocate from Cork to Monaco several years ago. That, in turn, led to him setting up the team.

“I have the luxury of cycling with some of the world’s best cyclists there,” he told this newspaper last October. “I thought, ‘how it cool it would be to have an Irish professional cycling team?’

“And that is really how it started. We thought we’d research it, give it a go, see who we could get on board and it just snowballed from there.”

I suppose the aim is just to go and represent ourselves as best we can. To do ourselves proud. To do the jersey proud and – saying it quickly– trying to win a stage.

And now the team is at the third-biggest stage race in the cycling. Delaney and the riders are delighted to be there, but they don’t plan on just making up numbers. “I suppose the aim is just to go and represent ourselves as best we can,” he says. “To do ourselves proud. To do the jersey proud and – saying it quickly– trying to win a stage.

“I think we are capable of doing that. The likes of Larry, obviously, is coming into some great form. Stefan is coming into great form. Adam Blythe is producing great numbers at the minute. And Peter Koning too. They are very, very strong, so it is very doable. If Lady Luck is on our side and the stars all align, it is possible.”

The nine-man squad includes Dunne, who has made selection thanks to his strength and consistency this year. He is hoping to be aggressive and be involved in several breakaways, something he has proven good at, but is also prepared to ride for others. He knows that those mentioned by Delaney are in a better position to win stages.

That’s fine. He’s still developing and learning and, besides, being part of the race puts him in a select group anyway. Only 14 Irish riders have ridden a Grand Tour before and, when the clock begins on Saturday, he will become the 15th.

“I am super-honoured and proud, really,” he said on Friday. “It feels like a bit of a big deal to be on that list, alongside some big names in the sport in Ireland. I am really proud to add myself to that list. It’s been a bit of a surreal feeling over the last few days that I will be starting a Grand Tour. I am really looking forward to it and getting stuck in.”

Delaney is equally proud to see his riders line out, but he wants to keep stepping things up. Riding the Tour de France is a major ambition for the team, and something he wants to see happen within the next three years.

“I think anything is possible,” he answers. “I think we have proved that. I think the answer to that question is I genuinely don’t know. Obviously we are lobbying very hard. [Tour organisers] ASO like us, race organisers like us. I think if we keep going what we are going, I certainly think we are going to be around the shortlist.”