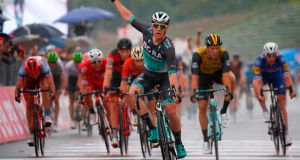 Sam Bennett celebrates as he crosses the line to take Stage 12 of the Giro D’Italia. Photograph: Luk Benies/AFP

Motorsports fan Sam Bennett seized victory on the famous Imola circuit on Thursday, jumping early to overhaul two breakaway riders and dominating the sprint to the line. Bennett was prominent in the closing kilometres of stage 12 of the Giro d’Italia, remaining close to the front on a climb inside the final ten minutes of racing, and then having the confidence to make his move.

“It was a tough final,” Bennett said in the post-stage interview. “There were still two guys in the front. I didn’t know how much energy they had left, and I didn’t want another stage getting away from me. So I decided to go early. I didn’t know if I could hold it or not, but I think I caught some guys by surprise, so it worked to my advantage.”

Bennett took the first Grand Tour stage win of his career - and became the fourth Irish Giro stage winner - last Friday when he beat points classification leader Elia Viviani to the line. Since then he has kept the momentum going, remaining in the main bunch on stage 10 when Viviani and others were dropped, and then picking up third at the finish. He had hoped to chase victory but two riders broke clear and were able to hold off the peloton’s chase.

That was firmly on his mind on Thursday’s stage, with Bennett determined not to miss out again. His Bora-hansgrohe team did what it could to help him out, but the Carrick-on-Suir rider then had to take over on the final climb, marking moves and even clipping off the front briefly.

“It was a bit of confidence,” he said, explaining that unexpected aggression so close to a sprint. “I saw people looking at each other, and I thought, ‘you know what, maybe I will slip away. There could be crashes on the descent, you never know, and then it is better to come from the front rather than to try to make up ground.’”

Bennett was also concerned by the aggressive Bahrain-Merida rider Matej Mohoric, and said his push forward was to be ready for him. Although Mohoric did subsequently manage to get clear, teaming up with Movistar’s Carlos Betancur, chasing by those behind kept the gap to a couple of seconds. Once inside the final kilometre, Bennett had sufficient confidence to make a bridging move himself, launching with 400 metres to go, thundering past the duo out front and then celebrating before the line.

Netting his second stage win of the race and what is his fifth podium finish brings him even closer to the Giro’s maglia ciclamino, the purple points jersey. It is the equivalent of the Tour de France’s green jersey, and Bennett is now just 22 points behind Viviani.

The Italian blew on Thursday’s stage, cracking on the run in to the finish and ended up over nine minutes behind Bennett. That’s a morale boost for the Irish rider, but he insisted that he was focussed on his own race. “We knew in the crosswinds [that he was dropped], but then we heard it was back on,” Bennett explained. “Then when it was lined out again we heard he was gone again. It didn’t really matter if he was there or not, we wanted to race to win. We were just trying to keep good position and race tactically well.”

No Irish rider has won the race’s points jersey. If Bennett can keep his momentum going, he has a strong chance of doing so. However he doesn’t want to get distracted at this point. “I will just focus on stage wins,” he said, talking about his immediate tactics. “It is getting closer, but I am just going to focus on stage wins. Then in the last week, if it is really close then maybe I’ll look at it.”

Bennett will have the chance to land a third stage victory on Friday. The 180km race from Ferrara to Nervesa della Battaglia is mainly flat and a bunch sprint is the most likely outcome. If that mass gallop to the line does indeed pan out, Bennett will be one of the big favourites for the win. Meanwhile, for race leader Simon Yates (Mitchelton-Scott), the stage will be about staying safe and regaining energy prior to this weekend’s big mountain stages.

This is also the case for Ireland’s Nicolas Roche (BMC Racing Team) and Ryan Mullen (Trek-Segafredo), who are metering out their energy in order to make the most of opportunities in the final week.