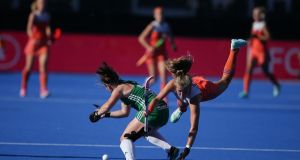 Ireland’s most capped sportswoman Shirley McCay raised the possibility that she may no longer retire from international hockey following the Green Army’s run to World Cup silver.

She had indicated last October that the competition would probably be her last but, when asked post-match, said she “can’t say” for sure if she will step away after her 273rd cap.

For one thing, the 30-year-old from Drumquin will have to run the idea by coach Graham Shaw, who is no doubt he wants her around for at least the road to Tokyo.

“First off, she will have to talk to me before she retires,” said Shaw in the aftermath of the 6-0 loss to the Netherlands in London . “She’s been a true star, a real role model for all young female players in Ireland. Her journey can’t end here and I will tell her that.

“We are 12 months away from an Olympic qualifier, 12 months of your career to achieve your ultimate dream.

“She has achieved one of them today with a silver medal. She’s done a fantastic job for our sport and I am hopeful she can do a lot more in the next few years. And then I will allow her to step away.”

For McCay, it was been a 12-year journey, encompassing plenty of lows, missing out on three Olympics in agonising fashion.

As such, there is a temptation to depart on the highest stage imaginable but she says she will take her time over the decision.

“I can’t say right now; this isn’t about me, it’s about the team and I am just so proud. I never thought this would happen so I need to go away and reflect and see. Maybe not, I can’t say.”

As for the final, McCay said it was a tough end but said the side can hold their heads high for their efforts against the Dutch juggernaut.

“We are disappointed that we conceded early. It was important to stay in the game early doors and give them a rattle but, hats off, they have been the best side in this tournament by a country mile and they showed that today. We gave a good account of ourselves and we have no regrets but class showed.”

The win over Spain in the semi-final on Saturday, however, will be the indelible memory from a mad-cap two weeks in London.

“Yesterday was our final. We put a lot into that and knew we would be going away as medalists today which was amazing for us. Plenty of smiles at the end.

“We are used to the emotions of the lows rather than the highs. We are in the bubble; going home, we will have time to reflect and realise just what we have done for the sport and for the people in Ireland.

“We spoke at the start about it being important to raise the profile of hockey. We are not in the fortunate position where we can just showcase our ability. What we have done is so important to promote the game for sponsorship and funding. We are aware of the hype and we are just going to enjoy it.”