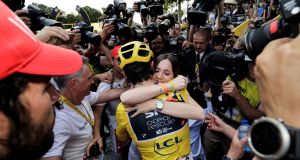 Geraint Thomas has been hailed as “Le Prince de Galles” and “Le cyclist next door” by French papers after winning his first Tour de France. But as the 32-year-old arrived back in Britain following a heavy night of celebrations, there were growing calls for Team Sky’s dominance to be curbed.

Thomas admitted that his victory had “all come together like a dream” and said he had received calls from Arsene Wenger and Elton John, as well as a video message from Thierry Henry. An open-top bus parade is also planned in Wales, although Thomas’s next appointment will be a criterium in Belgium on Tuesday evening.

Team Sky’s latest success went down less well in France, with the Tour director, Christian Prudhomme, calling for an end to power meters to make the race less predictable. Meanwhile, some French papers floated the idea of a salary cap for teams – pointing out that Sky has an estimated €33 million-plus budget – while Sunweb, the squad of second-placed Tom Dumoulin, is reckoned to be about half that, with Movistar’s budget about €13.5 million a year.

The 2014 winner, Vincenzo Nibali, has also floated the idea of a cap, a theme enthusiastically taken up by the French daily Liberation, which warned there had been a combination of “disillusioned anger” from fans and “icy indifference” from the public during this year’s Tour. As it pointed out, in 2012 the UCI athletes’ commission had agreed that a more equal distribution of wealth was needed in professional cycling, but nothing had come of it.

“Six years on, the distribution of the booty has gotten worse,” the paper wrote. “The gap between the means of teams has exploded – while the shareholders of ASO [tour organisers Amaury Sports Organistation] refuse to give up a cent.”

One unnamed French directeur sportif said a salary cap would make the race more exciting. “If Sky cannot afford the strongest team members in the world, [Chris] Froome is more isolated in the mountains,” he said. “Imagine them with only two men in the last pass, instead of four or five. It changes everything! The problem in cycling isn’t doping any more. It’s money.”

Meanwhile L’Equipe criticised both the Team Sky principal, Dave Brailsford, and the UCI president, David Lappartient, for their behaviour amid the fallout of Froome’s salbutamol case. “One can regret that Lappartient and Brailsford behaved like two yapping dogs who met on a pavement, sniffed each other’s behinds and barked over one another via the press,” it wrote.

It also condemned the behaviour of fans, saying: “There has always been schoolboy behaviour on the Tour, but a line was crossed this year, that of violence, and that in part ruined the feast.” - Guardian service