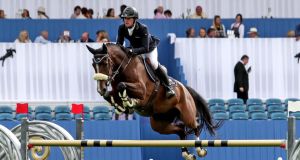 Darragh Kenny’s Paris Panthers are among six teams who will take part in the final of final of the lucrative FEI Global Champions League Super Cup. Photograph: Laszlo Geczo/Inpho

Darragh Kenny’s Paris Panthers and Bertram Allen’s Valkenswaard United are among the six teams which will compete in Sunday afternoon’s final of the lucrative FEI Global Champions League Super Cup in the Czech Republic.

Twelve teams contested both the quarter and semi-finals on Thursday and Friday in the O2 Arena in Prague with just the Madrid In Motion trio of The Netherlands’ Marc Houtzager and Maikel van der Vleuten plus Eduardo Alvarez Aznar of Spain returning a zero score on the second night.

The other three qualifying teams all finished on eight faults, with Valkenswaard United slotting into fourth with the fastest time of 208.19. The only member of this trio to go clear was Germany’s Marcus Ehning on Comme Il Faut, Wexford-born Allen having the vertical down in the middle of the combination with Ballywalter Farms’ Molly Malone V while Italy’s Alberto Zorzi also picked up four faults.

The other two teams going through to Sunday’s €6.4 million final are last year’s winners, the London Knights, who had a combined time of 212.15 on Friday, and Montreal Diamonds (213.95).

The Irish quartet of Padraig McCarthy, Sarah Ennis, Sam Watson and Cathal Daniels, who won team silver in the eventing competition of the World Equestrian Games at Tryon, North Carolina in September are looking for support from the equestrian community as they vie to win the team of the year award, which is decided on a public vote, at tonight’s RTE Sports Awards.

On Friday, Horse Sport Ireland announced that Sally Corscadden, who led the team at Tryon and has been nominated for the RTE manager of the year award, has signed a contract extension which will see her remain as Irish eventing senior high performance director up to the Tokyo Olympics in 2020. Rodrigo Pessoa, who holds a similar position in show jumping, has signed a one-year extension to his current contract, with an option to renew for a further year.

While the eventing team qualified for Tokyo in North Carolina, the show jumping team (who won the RTE team of the year award 12 months ago) have yet to do so. However, there will be three Olympic places on offer at next August’s European championships in The Netherlands and one at the 2019 FEI Nations’ Cup final.