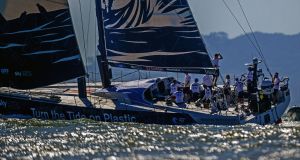 This is quite strange.

For the first time in this Volvo Ocean Race we have started a stage in light winds.

Since leaving Itajai in Brazil on Sunday, we’ve been sailing upwind which isn’t the fastest point of sail [angle to the wind] but it makes a nice change.

Coming up on deck after being off-watch and bracing for the usual onslaught of waves breaking over the bow but, then, nothing is ... well, kinda nice.

But progress is slow and is likely to remain so until we reach the Trade Winds off the north coast of Brazil. For now, we’re heading eastwards as we work our way through the St Helena High pressure system that dominates the South Atlantic Ocean and blocks our route north.

But it’s warm and sunny by day, cool by night and just lovely sailing weather with that caveat – it’s slow.

Our start from Itajai was also notable in that we held our own without any major handling errors during the short inshore display course that starts each leg. That has left our Turn the Tide on Plastics team well placed in these early miles of this 5,700 nautical mile leg to Newport, Rhode Island.

Currently, we’re mid-fleet on the official rankings but as we’re all within sight of each other it doesn’t matter so much – there is a long way to go before the standings settle.

In the race overall, we hold the bottom place, seventh from seven.

But that’s okay, our goal is to achieve a podium result in at least one leg and our form is nearing that target. We’re much slicker in our crew work now, everybody knows their roles inside-out and our confidence as ocean sailors is totally different from where we were eight months ago.

It’s kinda cool really, to think that just 100 miles north of our position lies Rio de Janeiro where I won silver just 18 months ago. And now we’re sailing by, heading for Cabo Frio which is known to be windy. In fact, many people wondered why the sailing event for the games wasn’t held there but in the final analysis, Rio came good with plenty of breezy days.

To reach Cabo Frio, we have to try and slingshot around the St Helena High and once past there we’ll hopefully be into faster sailing angles. Whoever gets there first could stage a getaway and open up miles on the chasing pack.

After that, getting through the Doldrums could be make or break for the leg and again prove a chance to open up distance on the pack – or not.

The big unknown will be the last stage into the finish off the US coast. Still over two weeks away, it’s impossible to know what sort of weather to expect so this eighth leg could prove decisive.

As for the overall race lead, that’s starting to look like a two-horse affair between the Chinese entry Dongfeng led by Charles Caudrelier and Spanish entry Mapfre skippered by Xabi Fernandez.

Dongfeng have a one-point lead – a tiny margin – over Mapfre who suffered rigging problems in the last leg and were late into Brazil handing over the overall lead as a result.

Basically, there are just four legs remaining to decide the race and the two leaders have been dominant from the outset. But, as we’ve learnt, with ocean racing anything can and will happen so to win, first you have to finish.

It’s all a long way off and right now, this easy weather is helping me get back into the rhythm of life on-board and the four-on, four-off watch system after a break of what was almost two months in New Zealand.

That holiday allowed me to work on my fitness which took a serious dive since I started this race. In particular, my cardio levels dropped a huge amount and it was very noticeable once ashore doing things like short walks or even climbing stairs.

The cause is the intensity of the watch system, especially in windy weather when you would routinely be called on deck from your bunk. This hugely disrupted sleep pattern has a knock-on effect on maintaining even a basic fitness routine.

Plus, there’s the added complication of how to exercise on a wildly pitching and rolling 65-foot boat.

So, for now it’s all about sailing as fast as possible and look ahead to Newport before the final stages across the Atlantic to home waters once again.