Pembroke, Banbridge and Monkstown vying for the last semi-final place on offer 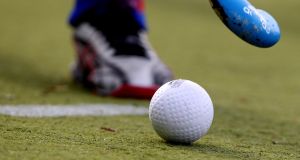 With all matches beginning at 3.00pm on Saturday, the final leg of the EY All Ireland League comes to a climax as teams scramble for the final place on offer in the Champions Trophy. Three teams are still in contention for the last place as the final round beckons.

Two Dublin sides Glenanne and Three Rock Rovers as well as Ulster’s Lisnagarvey have all qualified for the Champions Trophy, which has been moved from Banbridge’s ground at Havelock Park to Grange Road.

In contention for the last spot are fourth-placed Pembroke on 27 points and Banbridge and Monkstown, both on 26 points, all of them within striking distance of the final place.

In essence it comes down to a shoot-out between those three clubs to claim the only remaining slot. Banbridge may or may not be in a strong position as they face the table-toppers Glenanne.

On the face of it any game against Glenanne is a tough match but Monkstown’s 6-2 win over the former last time out suggests the league winners have been keeping their powder dry. Home advantage will favour the Dublin club.

Monkstown must travel to Belfast to secure nothing less than a win against Annadale while Pembroke are looking for the same result against Cork C of I at home in Serpentine Avenue.

Monkstown, hoping to save their season, need not be reminded that they were beaten 2-0 by Annadale last November at Rathdown while C of I drew 2-2 with Pembroke in their meeting at Garryduff last year.

The Champions Trophy, which takes place on the weekend of May 5th, has Glenanne facing the team that secures fourth place this weekend, while Irish Senior Cup Champions Three Rock Rovers meet Lisnagarvey in the other semi-final. The men’s final takes place at Grange Road on Sunday May 6th at 5.00pm