Women’s football making strides but only at the top 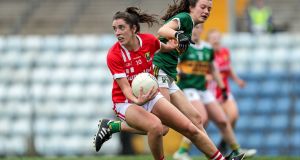 Despite some of positive stories emanating from women’s football recently, most notably the record attendance of 50,141 at last year’s All-Ireland finals following on from the attendance of 46,286 in 2017, there remains, it is believed, a wide scope for improvement.

Away from the glamour of Croke Park, attendances remain paltry, even for some of the strongest sides in the country such as last year’s All-Ireland finalists and league champions Cork.

While their manager, Ephie Fitzgerald, acknowledges that “there is momentum now that is unstoppable”, he feels the lack of crowds outside of All-Ireland finals remains a concern for the development of women’s sport in this country.

“You don’t get the crowds at matches which is disappointing,” he said at the launch of of the All-Ireland women’s championship in Croke Park yesterday.

“Obviously the World Cup was a special event but the crowds at that were massive, to be fair. I do think we just need that little bit more support.

“In our league final against Galway there was a few hundred there maybe. The Munster championship final in Waterford – a few hundred were there. I suppose you could argue they’re out of the way for people. But if the men were playing there they would be full.

“What’s the answer? I don’t know if there is any answer to it if I’m honest with you. I do think it’s improving but I don’t think it will ever get to the stage where you will have 10,000 at a ladies’ match.

“Women don’t follow sport as much as they should do. Ladies need to support ladies first. If you go to any of our league matches, a hundred there would be a lot.”

Positive strides are being taken to reverse the trends, with Tuesday’s launch used to announce the news that this year’s All-Ireland senior semi-finals would be played at Croke Park on Sunday, August 25th.

However Fitzgerald doesn’t believe poor attendances is the only issue the game is facing.

“The real issue is the expenses – nobody should be out of pocket.

“We’re the biggest county in Ireland; we have girls coming from Castletownbere and you’d be quicker in Dublin. We’re relying on their parents and the goodwill of others to bring them.

“Again it’s the question of should we be affiliated with the GAA? I think we should, from the point of view of expenses for the players and the fact we don’t get crowds at matches. It’s not feasible to give girls expenses if the money isn’t there for it.

“That’s something that definitely needs to be looked at but I do think the way forward, for me anyway, would be affiliation.

“It’s probably the biggest growing sport in the country. I know from my own club – there are hundreds of girls playing football.”

Likewise, Dublin manager Mick Bohan also noted the static nature of attendances and argued a change in championship structure is needed to inject “romance” back into the competitions.

Three-in-a-row-seeking Dublin were once again crowned Leinster champions with victory over Westmeath last month, though given the provincial championship boasted only a single game, the competition was rendered relatively insignificant.

“I thought the LGFA would be a shining light and would have gone without the provincial system,” he said at yesterday’s event.

“Who is it benefitting? It’s not drawing crowds. It’s not generating interest or beating the drum because you’re going right into a one-match final. It’s no disrespect to who is in it. I don’t think it’s fit for purpose.

“Why don’t you go straight into the round-robin system and have groups of six or so. And everyone gets the same amount of games. It certainly needs a change.”

The league, a competition Dublin were knocked out of at the semi-final stage, is arguably a more competitive competition capable of attracting more interest, though success in it doesn’t affect Bohan’s judgement.

“It’s a harder competition sometimes because you’re playing really competitive games in quick succession. If you look at any of the competitions like, for example, the World Cup series in rugby or whatever else – that’s what you do.

“You play the series of games in quick succession; that’s a real test of what you’re about.

“I just think they have a really good opportunity. I don’t think the same pressure is on them with crowds or anything like that.”