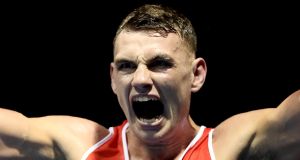 The split decision win qualifies McComb for the World Championships in Hamburg, Germany in August/September and the World light-welter title is now vacant as Kharkiv is the sole qualifier for Hamburg and Kazakhstan-born Dunaystev is out.

But Tipperary super-heavy Dean Gardiner was TKO’d by Ukrainian super-heavy Viktor Vykhryst of the Ukraine in the second round after being felled by a massive left hook.

McComb beat Kazakhstan-born Dunaystev on a split decision at Dublin’s National Stadium in April amid mumblings of “home town decision”.

But the Belfast light-welter did it again yesterday and it was apparent, as it was in Dublin, that the world champion was struggling against McComb’s tempo, footwork and slick counter-punching in the last-16 battle of the southpaws.

The top eight boxers in each weight in Kharkiv qualify for Hamburg and McComb will now meet England’s Pat McCormack in the quarter-finals on Wednesday with a bronze medal up for grabs.

He said: “It was a tough and tricky fight having boxed each other just a few months ago, but I listened to Zaur in the corner. He had a plan and it worked very well.

“I haven’t got a chance to watch him [McCormack] out here much. What I do know is he’s got as far so he must be doing something right, I will leave the plan to Zaur again and the rest of the team because I have trust in that.”

Meanwhile, ex-Ireland head coach Billy Walsh, now chief seconds with USA Boxing, helped steer the USA to 14 medals –two of which were gold – and six World places at the Americas Men’s and Women’s Championships in Honduras over the weekend.