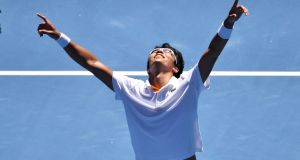 Chung Hyeon became the youngest man to reach the semi-finals of a grand slam for eight years with a 6-4 7-6 (7-5) 6-2 victory over fellow surprise package Tennys Sandgren.

This has been one of the most unpredictable men’s tournaments for many years and Chung joins Kyle Edmund in making it through to the last four as an unseeded player.

At number 58, he is also the lowest-ranked man into the semi-finals at Melbourne Park since Marat Safin in 2004 but he went into the match as the favourite against 97th-ranked Sandgren, whose run to the last eight has been remarkable.

Sandgren had only ever won two tour-level matches prior to arriving in Australia, but with the spotlight has come attention on his political views.

After upsetting Dominic Thiem in the previous round, the 26-year-old denied he is a supporter of America’s controversial alt-right movement but then subsequently deleted all tweets but one from his account.

The focus on Sandgren was back on the court on Wednesday, although Serena Williams appeared to reference the controversy when she tweeted “Turns channel” as the match began. Sandgren has been disparaging about the 23-time grand slam singles champion in the past.

He tried to let his tennis do the talking on Rod Laver Arena, although ultimately he was out-classed by Chung, who defeated Novak Djokovic in the fourth round and maintained his momentum.

The 21-year-old, the youngest man to reach this stage since Marin Cilic here in 2010, was only really troubled in the second set, when he had to fight back from 5-3 down.

Sandgren kept his hopes alive by saving four match points, one of them with incredible reflexes at the net, but Chung took his fifth chance and will play either Roger Federer or Tomas Berdych.

“In the last game, 40-0 up, I was starting to think what I had to do afterwards but after the deuce, break point, I just keep focused,” he said.