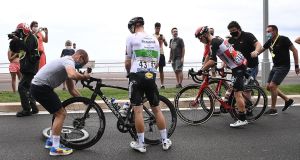 Ireland’s Sam Bennett is helped by staff members after a crash during the first stage of the Tour de France on Saturday. Photograph: Getty Images

Hopes of an Irish stage win and a first yellow jersey in 33 years fell just short on the streets of Nice on Saturday afternoon, as Sam Bennett finished a desperately close fourth on the final bunch sprint down the fast Promenade des Anglais.

The Carrick-on-Suir rider looked to have given himself every chance of victory as he took up his position to the left of the finish, but it was Kristoff Alexander from UAE-Team Emirates who made the decisive push from the right, a fourth ever stage win for the Norwegian rider.

Pedersen Mads from Trek-Segafredo took second, Bol Cees from Team Sunweb in third, and then came Bennett of Deceuninck Quick-Step, all finishing in the same time of three hours 46 minutes and 33 seconds.

As expected it came down to a bunch sprint, and a stacked one at that. Bennett, his jersey adorned with the green shamrock as reigning Irish road champion, was looking to become just the sixth Irish rider in the 107 editions of the Tour de France to win a stage.

A crash with 2.9km to go took down half the peloton, including Dan Martin and Nicolas Roche, although they quickly remounted, and given the crash happened just inside the last 3km, were given the same time as the lead finishers.

After a tense and anxious Stage 1, covering 156km in around Nice, Alexander bided his time perfectly, hitting the front just metres from the line. At 29, Bennett had made no secret of his desire to become just the fourth Irish rider to wear yellow, beginning with Shay Elliott in 1963 and then Roche in 1987, who each wore yellow three times, Sean Kelly is the only other Irish rider in that exclusive yellow club, and that was for one day only in 1983.

The three scenic loops around the city, two short and one long, included the leg-testing climb of the Côte de Rimiez, before the finish on the fast Promenade des Anglais. With road conditions midrace going from bad to worse and then back again, the peloton effectively self-neutralised the race coming down the final hills at Levens, and it continued at that cautionary pace some distance into last 40km and into the finish in the city - with the road by then dry again.

Dozens of riders ended up out of their clips, some slower to get back on their bikes than others. Several of the main contenders, including Julian Alaphillipe and Tom Dumoulin, spent time chasing back after embracing the roads early on.

After three stage wins in the 2018 Giro d’Italia, and two more in the 2019 Vuelta a España, Bennett himself was out of his clips after just 52 minutes of racing, coming off on the flat stretch, but there are further chances of that stage victory to come.

Former Barcelona president Bartomeu arrested after club offices raided 12:41
Echoes of Berlin 1936 . . . Should Beijing Winter Olympics be boycotted? 10:01
The Offload: Ireland women must be allowed to move with the times 10:00
Tiger Woods touched by red and black tribute by fellow players 08:52
England prop receives death threats for not clapping Wales off the pitch 08:29