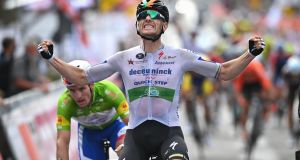 They’re on different teams, at different stages of their career, with different stage winning aspirations, and still the three Irish riders set to start the 2020 Tour de France have plenty in common - beginning with the fact none of them were actually born in Ireland.

Only five Irish riders in history have won a stage in the Tour de France, including Martin, and all three harbour some hopes going into this year’s race, beginning with Bennett as early as Saturday’s opening Stage 1 around Nice.

That playing career wound down four years later, the family returning to Carrick-on-Suir when his father was offered the job to manage Waterford United, and Bennett briefly toyed with the game himself, before discovering another sport through a local mountain bike league.

Once transferred to the roads success came quick: in 2008, aged 17, he was Irish Junior road race champion, and a year later became the youngest ever rider to win a stage in the famed Rás Tailteann. He joined French amateur team Vélo-Club La Pomme Marseille, where after several seasons of hard knocks, and more than once coming close to quitting the sport, he rode with pro teams An Post-Sean Kelly and then NetApp-Endura (later Bora-Hansgrohe) from 2014.

His first Tour de France start in 2015 was cut short by illness and injury, his second start a year later marred by another crash in Stage 1, although he did make it to the Champs-Élysées in this one, in 174th position, the last rider to finish. After three stage wins in the 2018 Giro, and two more in the 2019 Vuelta, and now riding his own self-proclaimed dream team in Belgian outfit Deceuninck-QuickStep, Bennetthas made no secret of stage aspirations this time.

Martin and Roche have other things in common, including being first cousins. Martin was born in Birmingham, and grew up in Staffordshire with his mother Maria, sister of 1987 Tour de France winner Stephen Roche, and father Neil Martin, also a former pro cyclist; despite winning a British under-18 title in 2004, Martin has rode all his senior career for Ireland, beginning in 2006.

Saturday’s Tour start comes just over two weeks after Martin withdrew from Stage 3 of the Criterium du Dauphine with a fractured bone in his lower back. Martin spent that time recuperating at his home in Andorra, before being confirmed to lead the eight-man squad of his new 2020 team Israel Start-Up Nation. Martin made his Tour debut in 2012, winning Stages in 2013 and 2018, and came closest to the Tour podium in 2017, finishing sixth, riding the second two weeks with a broken bone in his back.

Roche was born in Conflans-Sainte-Honorine, in suburban Paris, where his father Stephen and French mother Lydia were living, and first made his cycling name by winning the Junior Tour of Ireland in 2002; despite holding dual nationality, he has raced for Ireland as a senior since the 2006 World Championship in Salzburg.

He’s now set to equal his father Stephen with his number of starts in the Tour de France - with that further extending his record for the most starts in Grand Tour history by any Irish professional rider. Roche was one of the first riders confirmed in the eight-rider Team Sunweb back in July, for what will be his 10th Tour start, the same as his father (who won the race outright in 1987, and also finished third in 1985), and his 23rd Grand Tour start in all.