Mark English has appeal against exclusion from Irish Championships rejected 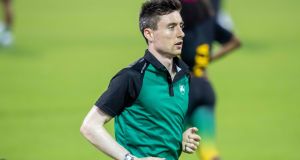 Mark English has lost his appeal against exclusion from this weekend’s National Track and Field Championships at Santry. Photograph: Morgan Treacy/Inpho

English, a three-time European medal winner over 800 metres between indoors and out, was seeking a record eighth Irish outdoor title, his 15th in all, but was denied entry due to the additional self-isolation requirements being imposed by Athletics Ireland.

After being postponed from their original June date due to Covid-19, the 2020 championships are being staged over two successive weekends, last weekend and this coming. In preparation, Athletics Ireland announced that any athlete travelling from overseas to compete would be required to have done 14 days of self-isolation prior to their event, with proof of travel details, whether or not they were coming from a so-called green-list country, which under Government guidelines, such restriction of movement does not apply.

English did travel to a green list country, Italy, on Monday of last week, running 1:48.42 in Lignano on Monday, under the impression this wouldn’t prevent from running at nationals. European Under-23 800m bronze medal winner Nadia Power did likewise, racing twice in green list country Finland earlier this month, returning on August 13th, again under the assumption this wouldn’t impinge on her participation, but was also denied entry.

Other sports are using the Government guidelines around green list countries (Dundalk FC, for example, playing their Champions League qualifying game in Hungary last week, thereby free to play again by the FAI last weekend). Power’s coach Enda Fitzpatrick, who described her as “the most professional and dedicated athlete I know”, also added that she had taken a Covid test, paid for out of her own pocket, prior to taking her appeal to Athletics Ireland, which was also rejected.

In the appeal against this decision to deny him entry, Patsy McGonagle, team leader and chair at his club Finn Valley AC, made a written submission on English’s behalf, appealing for “natural justice”, as English sought to become the first Irish athlete in 148 years to win eight Irish 800m titles.

Athletics Ireland rejected his appeal on the grounds that English “was made aware of rules and does not dispute direct communication from the High-Performance Department, that in advance of his trip to Italy that there would be an implication for him entering the National Championships” and that “athletes must be in the country 14 days prior to the competition if they wish to compete”.