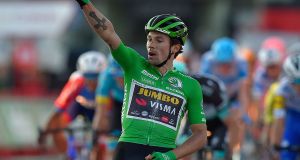 It certainly wasn’t the bunch sprint that Sam Bennett had envisaged and nor was he even a part of it, the Irish rider trailed off long before the Stage 10 finish of the Vuelta a España.

Instead it was defending race champion Primoz Roglic who surprised everyone and perhaps even himself to take his third stage win of the race. The Slovenian rider was first up the slight uphill finish at Suances on the Bay of Biscay, his 10 second winning bonus enough to put him back in the leader’s red jersey.

Bennett did make it there in the end, the last of the 157 riders to finish on the day, riding in alongside Deceuninck-QuickStep team mate Ian Garrison 12 minutes and 51 seconds in arrears. At one stage it appeared his loss might be a whole lot more, or indeed if he’d even make it at all.

According to Bennett’s team management afterwards: “it was nothing particular on the day, he just wasn’t at his best, which was needed to make it through those tough last 30kms, where many of the other sprinters dropped too. He’s good to continue for now.”

Prior talk of it being a stage more suited to the sprinters soon evaporated as the finish approached. Dan Martin produced another excellent ride to finish seventh on the day, in the same time as Roglic, and three seconds ahead of Richard Carapaz, who drops down to second overall, on the same time as Roglic, with Martin now just 25 seconds back on both riders in third.

It was Felix Grossschartner of Bora-Hansgrohe who finished second on the day, with Andrea Bagioli also of Bennett’s Deceuninck-QuickStep in third, as plenty of the other main sprinters struggled including Stage 9 winner Pascal Ackermann. He finished 151st, 6:22 down.

The first warning sign that Bennett had a problem came at the Alto de San Cipriano, a nasty little 5km climb which came with just under 60km to go. Clearly in trouble, out of the saddle and dropping several bike lengths off the peloton, he appeared to hit cycling’s equivalent of the wall. The 30 year-old was not looking himself, at one point appearing to cough and sneeze when caught by the race TV. With 27km left he was dropped off the back for good, and it was clear there would be no way back from there.

It’s possible too that the emotion and physical exertion of Thursday’s stage 9 finish may have taken some toll too. Not helped by the fact Bennett spent almost an hour in the aftermath of that finish in the VAR truck of the UCI race commissaries, as they debated and heard his appeal against the relegation from his original stage win.

It is Bennett’s first time riding two Grand Tours in the same season, the Vuelta starting just four weeks after what was widely regarded as one of the toughest routes of the Tour de France in recent years. There, Bennett finished that race as only the fifth rider in Tour history to win the last stage while also wearing the green jersey since the race first started finishing on the Champs-Élysées in 1975. After three weeks of racing, 58,000m of climbing and 3,482km of road, he came away with two outright stage victories and finished six times in the top five.

Another eight stages, plus Monday’s second rest day, remain before the finish of Stage 18 in Madrid on Sunday week. Bennett himself had originally described the bunch sprint finish at Aguilar de Campoo on Thursday as “a bit sketchy”, the Irish rider taking what appeared to be his second stage win of the race after finishing just under a bike length clear of former Bora-Hansgrohe team mate Ackermann.

But in the end he was denied what would have been his ninth Grand Tour stage win (he won two in the Tour de France this year, two in the Vuelta last year, and three in the 2018 Giro d’Italia).

Then before Friday’s start, Bennett had hinted at some of trouble that awaited on the 185km of bumpy roads on the route from Castro Urdiales to Suances: “Today looks pretty hard, pretty steep in the finale, so hopefully my legs don’t blow up before the end,” those words proving largely prophetic.

“It was strange yesterday. First you get to enjoy the moment . . . the Trek guy [LIEPINS]was okay with me after the line so I was surprised everything changed. I gave my opinion to the commissaries, that I moved to protect myself and for the safety of the riders behind.”

From Suances the race heads back into Martin’s mountain territory for two pure-climbing stages over the weekend, arguably the hardest of the Vuelta so far, including the dreaded Alto de l’Angliru. The next properly flat stage for Bennett and company isn’t until the race finish in Madrid on Sunday week.