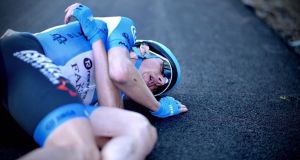 Dan Martin lies on the road after crossing the finishing line at Alto de Moncalvillo after stage 8 of the Vuelta a España. Photograph: Noa Arnon

For a while they circled each other like the vultures which inhabit the Alto de Moncalvillo and then one by one moved in for the kill, Dan Martin left fighting for some scraps and yet surviving just about satisfied by the end.

It’s been described as the hardest Vuelta a España in years, the stage 8 finish on the Moncalvillo unquestionably the toughest so far, Martin collapsing off his bike just beyond the finish, before being assisted by his medical team at Israel Start-Up Nation.

He was soon back on his feet and recovering, and even if not yet halfway to Madrid there is little doubt the four main contenders are assuming their absolute command.

Eight days after winning the opening stage, Primoz Roglic helped himself to another, perfectly timing his effort up the near mile-high Moncalvillo to finish 13 seconds ahead of Richard Carapaz, who does retain his leader’s red jersey, only with Roglic now moving into second, team Jumbo-Visma’s defending champion from Slovenia suitably chuffed by his effort too.

Then came Martin, just 19 seconds back on Roglic, gaining another four seconds for finishing third, and perhaps crucially, even before the halfway stage, opening some more room on Britain’s Hugh Carthy, who late on the climb had taken a small jump on the leading trio, only to pay for it inside the last kilometre.

“Yeah, another really challenging stage,” said Martin, speaking a short while later and suitably recovered in the team bus. “When the [first] breakaway went I didn’t expect to be fighting for the stage victory but obviously Ineos and Movistar has different ideas and the pace was on all day.

“I felt good on the last climb and decided to test the other guys. I paid for that effort a little in the end and when Primoz attacked in the last kilometre I had no response. At that point it was about getting to the finish line as fast as possible. I gave it everything I had and we are proud of the performance again.”

On his rapid dismounting, he added: “I was tired and the road looked comfortable. Certainly more comfortable than my bike at that moment.

“Another difficult stage behind us, a different challenge ahead the next two days to just stay out of trouble and try to recover a bit, before the incredibly difficult weekend.”

The Moncalvillo, making its Vuelta debut, was that kind of climb, a relatively short 8.3km but with some brutal uprights which after the 164.5km from Logroño took the peloton apart, reduced to just 10 riders at the front once the climb got going properly, and the early breakaway of seven riders was contained with 12km to go.

Indeed Roglic was the last to make his move for the kill, with just 750m to go, his 10-second bonus for taking the stage leaving him just 13 seconds behind Carapaz on the general classification, the Ecuadorian rider from Ineos Grenadiers doing all he could to limit his loses.

As did Martin, who clearly dug deep as possible, dripping sweat in the bright evening sunshine which greeted the stage finish, no crowds allowed or indeed required: the individual efforts were captivating enough, his brief collapse further proof of that.

Although relatively minor, Carthy’s loses in fifth place, the British rider finishing 33 seconds down, could prove the most costly, as he drops to fourth overall, 16 seconds behind Martin, who is still just 28 seconds behind the race lead.

That leading quartet (Enric Mas is fifth, 1:54 back) is unlikely to change after stage 9 and 10, which for the first time since last Friday, reverts back in favour of the sprinters, including Sam Bennett. Of those two stages, Thursday’s 163.6km from Castrillo del Val to Aguilar de Campoo looks more like to end in a bunch sprint, Bennett doing all he needed to do on this stage, finishing safely back in the group 26:48 down, in 144th place.

Friday’s stage 10 from Castro Urdiales to Suances is longer at 187.4km, but again mostly flat, the Deceuninck-Quick-Step already declaring his intention to chase a second stage win, after his cannonball win into Ejea de los Caballeros last Friday. Martin won’t mind a day back in the peloton.