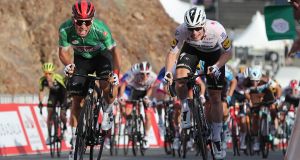 Sam Bennett put in a powerful showing on Monday’s stage two of the UAE Tour in the United Arab Emirates, netting second in the race to the top of Hatta Dam in Dubai. Bennett was part of the main bunch which hit the bottom of the climb together, and launched his sprint early to try to beat the other sprinters.

However Australian rider Caleb Ewan (Lotto Soudal) was able to hold his wheel and came around Bennett close to the line, beating him by two seconds. The Irish road race champion finished as runner-up, with Arnaud Démare (Groupama-FDJ) and the next riders a further two seconds back. Eddie Dunbar was in this group, placing 30th.

The result was Bennett’s fifth podium finish so far this season. He said afterwards that he made a mistake in the sprint, although it seems unlikely he would have beaten Ewan.

“I don’t know what I did in the last 50m, but I checked right and I rode into the barrier for a split second and that gave Caleb a bike length,” Bennett said. “I kicked again and did a good effort, but I couldn’t come back. I did everything that was possible today and even though I’m not satisfied with the result, I look on the bright side of things, and that’s the legs I had on this hard climb.”

Ewan leads Bennett overall by 12 seconds, with Démare sitting third. Dunbar is 20 seconds back in 32nd, but looks set to move up the general classification when the race hits the much harder Jebel Hafeet climb at the end of Tuesday’s stage. Dunbar is targeting a high overall finish in the race.

Bennett will have another change to go for a stage win on Wednesday’s fourth stage, which ends on Dubai City Walk.

The WorldTour race runs until Saturday.

1 Iggy Clarke cherishes the friendships he made while playing for Galway
2 Horse Racing Ireland make their four tracks available to government
3 Nicholas Quinn: ‘Swimming became how I dealt with grief’
4 Sam Bennett ready to peak despite Tour de France uncertainty
5 Ian O’Riordan: The aloneness of the long-distance rider
Real news has value SUBSCRIBE