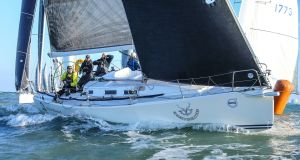 A dozen boats are already entered from the Irish RC35 fleet. Six J109s make up the core of those numbers including ICRA Commodore Richard Colwell and Outrajeous, the Goodbody family team with White Mischief and Liam Shanahan’s Ruth making a return to inshore racing.

With the Half Tonner fleet using the ICRAs as the first event in something of a nationwide tour, it’s no surprise to see already a seriously competitive line-up coming from Howth Yacht Club.

It’s a shot-in-the arm for the cruiser body and much more welcome news than that which faced ICRA in the aftermath of its blown-out 2018 championships in Galway last August.

And with 275 boats already declared for the four-day Dun Laoghaire Regatta in July – including two Welsh classic dinghy fleets – it looks like Dun Laoghaire and Dublin Bay by extension is set for a bumper Summer on water.

Also in Dun Laoghaire, Rio Silver Medalist Annalise Murphy leads the Irish Olympic Sailing team into Friday’s celebrations at the official opening of its new High-Performance HQ at the Irish Lights Depot. With under 500 days to Tokyo 2020, Minister Mary Mitchell O’Connor TD will unveil the ‘new home and training centre’ for the team that has yet to qualify for the Olympic Regatta.

2019 will be a crucial season and the men’s skiff and Laser teams will be tested next week in one of Europe’s biggest regattas at the Trofeo Princesa Sofia Regatta in Palma from March 29.

In Cowes, following the 340 available places selling out in just four minutes and 37 seconds when the Fastnet Race entry opened on 7th January, the Royal Ocean Racing Club (RORC), organisers of this, the world’s largest offshore yacht race, has provided a sneak preview of the 2019 line-up that includes Conor Fogerty’s new Beneteau Figaro III from Howth.

Dinghy duo Atlee Kohl and Jonathan O’Shaugnessy from Royal Cork Yacht Club emerged champions of a newly created 29er Skiff event last weekend. The Crosshaven youths will be the first pair to put their names on a trophy presented by Commodore Liam Lynch on behalf of Tralee Bay Sailing Club.