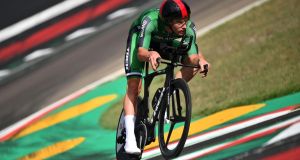 Reigning national time-trial champion Ryan Mullen was the best of the Irish duo who took to the 37.1km World Championships circuit at Imola on Friday, finishing in 25th position, just over two and a half minutes behind the race winner.

Filippo Ganna lived up to local expectations by taking the title for Italy, adding to the Track Cycling Individual Pursuit title won back in March, clocking a best time of 35 minutes and 54 seconds, leaving him 27 seconds clear of second-placed Wout van Aert from Belgium, and 30 seconds ahead of Switzerland’s Stefan Küng.

Six days after finishing his 10th Tour de France, 36-year-old Nicolas Roche finished in 31st position, three minutes and two seconds down, and both riders will now be joined by Ben Healy in Sunday’s elite race.

Conditions at the famed Autodromo Internazionale Enzo e Dino were windy, an impressive ride no less by Ganne, who rides for Ineos Grenadeirs. He came in far ahead of defending champion Rohan Dennis from Australia in fifth, with Britain’s Geraint Thomas in fourth, 37 seconds back.

Only 56 riders took to the start of what are a stripped down championships, Imola only confirmed as the host on September 2nd to replace Aigle, Switzerland, who had to withdraw because of the country’s Covid-19 situation. Sunday’s elite road race offer of an arduous 258.2km route including 5,000m of climbing.