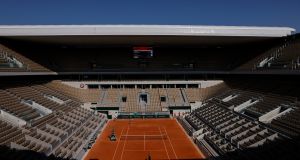 Only 1,000 spectators will be allowed to attend the Frech Open each day. Photograph: Yoan Valat/EPA

The French Open has confirmed only 1,000 spectators will be allowed to attend the tournament each day.

Having reduced the daily capacity from a planned-for 11,500 fans to 5,000 a week ago, tournament organisers have now had to reduce further to comply with new rules introduced to try to curb France’s soaring rate of coronavirus infections.

Tournament director Guy Forget told a press conference on Thursday that organisers were still hopeful of keeping to their 5,000 tally but French Prime Minister Jean Castex later said Roland Garros would not be exempt.

Around 35,000 spectators usually attend the tournament every day during the first week, and a statement from organisers read: “From the very outset of the public health crisis that our country is experiencing, the French Tennis Federation has consistently worked closely with government departments to determine how to organize the tournament in the current situation.

“It deeply regrets these new restrictions.”

With the tournament beginning on Sunday, organisers have been left with a major organisational headache. Current ticket-holders will be put into a draw for the 1,000 places, with those who miss out given priority access for 2021.

Andy Murray’s clash with Stan Wawrinka and Johanna Konta’s match against Coco Gauff will be two of the contests played on Sunday.

It is Murray’s first appearance at Roland Garros since his hip problems flared up during a semi-final against Wawrinka in 2017.

There was disbelief when they were paired together on Thursday, and the former British number one said: “Obviously it’s an amusing draw.”

Murray continued: “It’s actually the first time I’ve watched the draw in the last 10 years. We’ve got this group chat with a bunch of the guys and they sent a link through to it.

“Obviously a very tough match. That match I played against Stan a few years ago was a brutal one. I kind of knew something was up before the Nishikori match there (in the quarter-finals).

“I didn’t know that it was that bad but then at the end of the Stan match, in the fifth set I was struggling to push up on my serve and moving to my forehand, and I never felt the same after that match.”