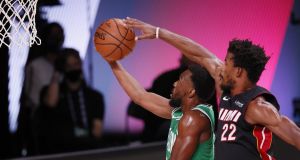 Rookie Tyler Herro dropped a career-high 37 points to push the Miami Heat to within one game of the NBA finals with a 112-109 victory over the Boston Celtics.

The 20-year-old netted 22 in game three before coming off the bench to great effect on Wednesday, punishing the Celtics for their 19 turnovers through the game with 17 points in the final quarter alone.

The Celtics nearly hit back as they pulled within three with 16 seconds on the clock. The Heat’s Jimmy Butler gave Boston a sniff when he missed a shot with 1.1 seconds left, but the Celtics were without a timeout and could not manage a shot.

Boston, for whom Jayson Tatum scored 28 points, go into Saturday’s game five needing a win to keep their season alive.

Man United and Chelsea play out drab draw in the driving rain 19:54
Antrim too good for Waterford in league clash in Dundalk 19:09
Jim Bolger enjoys a fine day on both sides of the Irish Sea 19:07
Championship: Browne and McClean on scoresheet as Idah sees red 19:04
Wicklow edge Division Four winner takes all clash with Wicklow 18:59
Here is your handy guide to sport on television this week