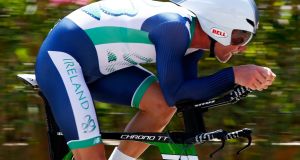 After netting eighth in the recent stage one time trial in the Tour de Suisse, Ryan Mullen continued his strong form against the clock when he took the Irish elite time trial championship in Wexford.

However he was subsequently disqualified for going the wrong way around a roundabout, something the race referees determined shortened the course and meant that he didn’t complete the full distance.

The bronze medal was consequently awarded to Marcus Christie (Performance SBR), who was two minutes 29 seconds off Mullen’s time.

Michael O’Loughlin (Team Wiggins) was best of the under-23 riders, beating Conn McDunphy (Team Raleigh) by one minute and Eddie Dunbar (Axeon Hagens Berman) by two minutes six seconds. Dunbar is recovering from a crash in the Under-23 Giro d’Italia.

The women’s race was won by Ballymena RC rider Eileen Burns, who was 13 seconds faster than Kelly Murphy (Team Ford Ecoboost) and 43 ahead of Eve McCrystal (Garda CC).

“It was quite an enjoyable course, with a bit of everything,” she said. “This year it was polar opposite to how I felt after last year’s race.”

Mullen and Roche will be amongst the favourites for Sunday’s Elite men’s road race, with others to watch including Sam Bennett (Bora-Hansgrohe), former champion Matt Brammeier and his Aqua Blue Sport team-mate Conor Dunne, plus the An Post Chainreaction trio Conor Hennebry, Sean McKenna and 2015 champion Damien Shaw.

Also capable of a big result are 2016 bronze medallist O’Loughlin, 2015 silver medallist Dunbar, Matthew Teggart (An Post Chain Reaction) and Mark Downey (CC Etupes). These are all eligible for the under-23 title.

Defending women’s champion Lydia Boylan (Team WNT Pro Cycling) returns to chase another title, and will be joined by her team-mate Josie Knight. McCrystal, who was second last year, is confirmed, as is third-placed finisher Fiona Meade (Blarney CC). Boylan has been in fine form this year and will be the favourite.

Both the men’s 175.9 kilometre race and the women’s women 97.6 kilometre event will be held in Wexford on Sunday, while the M40, M50 and M60 masters events will take place on Saturday.

Racing in La Massana, Andorra, he beat Italian rider Fabrizio Pezzi by one and a half minutes and Angel Llorens Zafra (Spain) by one minute 51 seconds. Peter Buggle competed in the 50-59 age group race and was a fine third behind Alain Morra (France) and Tommy Olsson (Sweden).

Meanwhile two Irish riders have been confirmed for the upcoming Tour de France. Dan Martin, ninth last year, will lead the QuickStep Floors team in the race, and is capable of a place in the top five. He was third in the recent Critérium du Dauphiné, beating defending Tour champion Chris Froome (Team Sky).

Also set for the French event is Roche, who will be riding in support of his BMC Racing team leader Richie Porte of Australia.