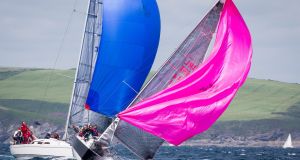 John Swan’s Harmony rounds up during a broach in breezy conditions at the O’Leary Life Sovereigns Cup at Kinsale. Photograph: David Branigan/Oceansport

A quick glance at fleet sizes at sailing events recently point to a significant drop-off in numbers amongst the largest racing yachts seen in the domestic club scene. At the recent ICRA national championships in Crosshaven, just two boats contested Division 0.

But while Conor Phelan’s Jump Juice and Tony Ackland’s Dark Angel enjoyed close match-racing over the three days of the weather-shortened series, their class may only have been slightly bigger but for the loss of Inis Mór on passage to the event and lack of crew for a Kinsale entry.

However, this week’s O’Leary Life Sovereigns Cup also suggests that another factor may be in play aside from the economic challenge of campaigning boats of around 40-feet or bigger.

Like many events in recent years, a Coastal Division is being held this week in Kinsale that has attracted many of the larger entries that might otherwise be racing in Division 0.

Conor Doyle’s Freya of the host club along with Kinsale Yacht Club Commodore Thomas Roche’s Meridian both enjoyed making the most of their local knowledge this week in the waters between the Big Sovereign and the Old Head of Kinsale.

Arguably, James Tyrrell’s Aquelina might previously have raced in Division 1 but the Arklow boat’s handicap would have been borderline at the split between 0 and the smaller division so switching to the Coastal class is a neat alternative.

“The windward-leewards courses are all up and down, up and down and it seemed to us that coastal courses and round the cans offered more fun,” one crew-member told The Irish Times.

A mix of courses within Division 0 might offer a solution but the technical purity of the windward-leeward appears to set to continue.

Fortunately, this week’s series mixes different course types so the second day of racing at Kinsale saw Divisions 0 and 1 sail alongside the Coastal fleet instead of the windward-leeward type course.

All in all, Division 0 might easily feature as many as ten entries, not an unhealthy turnout but the question arises whether the lack of course variety, presence of the ‘super-crews’ and exotic designs at the front-end of the class is putting-off the more Corinthian-minded teams resulting in a split of interest.

Meanwhile, if a substantial number of Irish boats took a pounding over recent weeks around our own coasts, spare a thought for Ireland’s sole entry in the Original Single-Handed Transatlantic Race (OSTAR) that finished in Newport, Rhode Island earlier this week.

Howth YC’s Conor Fogerty on his Sunfast 3600 BAM won his class and finished second on the water in a three-week race that saw all but seven boats forced to retire or in some cases, abandon ship to be rescued mid-ocean.

The severity of the weather made BAM’s achievement all the more impressive but it also marks another sign of growth in both offshore and short-handed sailing in this country.

Last weekend saw a record entry of 45 boats for the 275-mile Volvo Dun Laoghaire to Dingle Race that saw Paul O’Higgins’ Rockabill VI from the Royal Irish YC win overall with a time of just over 49 hours and 49 minutes.

Although the healthy entry for the race bodes well for next Summer’s 704-mile Volvo Round Ireland Race, once again the stretch of water from the Tuskar Rock to the Skelligs is underlined as the make or break stretch that only the hardiest crews are likely to endure.

With over half the ‘D2D’ fleet obliged to retire due to the conditions this year, although a much longer proposition in June 2018, the round Ireland offers a second bite of the cherry with the prospect of a bucket-list circumnavigation included.

1 Gordon D’Arcy: Digging deep only recipe for Twickenham success
2 Robbie Henshaw and Bundee Aki to lead from the centre
3 Diego Simeone raises the roof with sideline spectacle
4 Jurgen Klopp: ‘welcome to Anfield, it’s not over yet’
5 Seán Moran: GAA in trouble if sectional interests not accountable to rules
Real news has value SUBSCRIBE