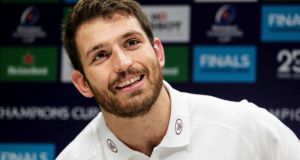 Jean Kleyn: “If we slip up this weekend and we have a poor performance they can come right back in and we could end up third on the log.” Photograph: Laszlo Geczo/Laszlo

Irish lock Jean Kleyn says he loves having a crack off tough packs such as Saracens and Exeter and can’t wait for Saturday’s decisive Heineken Champions Cup clash with Mark McCall’s men.

The 6ft 8ins, 19-stone bruiser who made his Ireland debut against Italy in August before featuring in the World Cup in Japan, said he revels in the big physical exchanges.

“I do enjoy the games against the English sides, Saracens and Exeter, they are hard as nails and it’s good fun at the end of the day. It is all in the spirit of the sport, and all that stuff, but it is a good challenge.

“It is a good physical challenge. You get to put in some hard hits, and sometimes some hard hits get put into you. It is all good but it is something I enjoy. I enjoyed this weekend’s game and hopefully I will enjoy Saturday’s game.”

He said the manner in which they prevented Saracens from getting a try on Saturday at Thomond Park and held out for a 10-3 win shows they are making progress in becoming a more hard-edge team.

“We could have easily slipped up there again and had one mistake following another. It could have been a different story results wise then. For us it’s an incredibly good sign as to what our work is leading to and hopefully where we are heading, towards the end of the season,” added the 26-year-old from Linden in South Africa.

The former Stormers lock is now in his fourth season with Munster and has played 67 games for the provinces, and said there is much more to Saracens than brawn.

“They are a world-class side, they showed that when they won the Premiership and the European Cup earlier this year. So, you can’t just put it down to size. Their players are skilful and well drilled. They are good players.

“I would say their size does have an influence because there are a few big fellas in there. But I am bigger than a lot of the players I play against and sometimes you don’t come out on the good end of every collision. It is all about just handling it effectively and within the team.

“It is down to us to keep them out of it now. Realistically speaking they are only five points behind. If we slip up this weekend and we have a poor performance they can come right back in and we could end up third on the log,” he added.

1 Sideline Cut: Vignette shows why Bird is the true shark in The Last Dance
2 Seán Óg Ó hAilpín regrets ‘callous’ aftermath of Cork strikes
3 Break allows James Ryan to rest, bulk-up and study history
4 Patience and a local focus: More clubs should be like Athletic Bilbao
5 How 1995 remains a key part of the Springbok spirit
Real news has value SUBSCRIBE