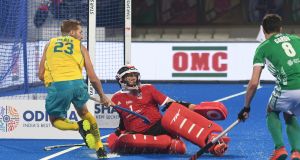 The international hockey player was confirmed by the IOC as one of 30 athletes who will be seeking a place on the IOC Athletes’ Commission next summer, when four new members will be elected.

The Athletes Commission is composed of a maximum of 23 members, who serve a term of eight years. Up to 15 members of the Commission are IOC members, providing athlete representatives with the same representation within the IOC membership as the International Federations and National Olympic Committees such as the Olympic Federation of Ireland.

The Athletes Commission was established in 1981 as an official body that serves as a link between athletes and the IOC.

From Kinsale, Harte, whose twin brother Conor also plays for Ireland, competed in the 2016 Olympic Games in Rio and has played professionally around the world including in the Netherlands and the Indian Hockey League.

“I am very proud and pleased to be Ireland’s candidate for election for the IOC Athletes’ Commission,” said Harte.

“As hockey team captain at Rio 2016 and World Cup 2018, honesty, trustworthiness and mutual respect were key to my leadership, and these are values which I will base my campaign on in the coming months.

“To have an opportunity to be the link between athletes globally and the IOC is something that really excites me and motivates me to be elected. I am not a fan of being a ‘hurler on the ditch’ and like to be proactive about being a voice for athletes. I believe strongly in providing equal opportunities for all athletes to support a successful Olympic campaign regardless of their background. My three main priorities in my campaign will be gender equality, athlete transition and focusing on the areas of anti-doping and the prevention of manipulation in sport.”

Harte’s campaign has been endorsed by President and CEO of the Olympic Federation of Ireland Sarah Keane and Peter Sherrard. The Executive Board of the IOC approved his candidature at their board meeting on Thursday December 5th.