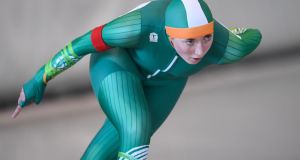 Skating on thin ice is just where Tara Donoghue loves to be, and as Ireland’s only elite long-track speed skater, the faster the better.

Still a junior athlete, she’s clocked 100 metres in 11.6 seconds, with her skill on the blades and understanding of air resistance keeping her balanced. Her favourite events are 1,500m and 3,000 metres so add fighting lactic acid to that skill-set.

Donoghue says: “If the speed builds up you have the feeling you are drifting like in a car, usually you wouldn’t be afraid.”

Her skates kick the ice in swift, hard movements at the start of a race, then Donoghue leans forward to create a low centre of gravity and kicks out in wide sweeping movements. Her arms flutter like birds’ wings, arcing away or tucked behind her back as the race and the corners progress.

Last year in Helsinki, she raced on an outdoor track under falling snow and temperatures of minus-16 degrees Celsius. She says: “My first race I was racing without gloves, and I thought I won’t do that again, it wasn’t much fun.”

It wasn’t fun either when her rubber aerodynamic suit malfunctioned just before the Mass Start race at a Junior World Cup event last month.

Most disciplines are raced off in pairs with the clock calling the winner. But the Mass Start, described as ‘NASCAR on ice’ by a top American skater, involves up to 24 skaters racing together for 16 laps.

Donoghue says: “My suit ripped, it tore as I was just pulling it up. It tore at the top. My team stuck it with tape. I was hoping they (race organisers) wouldn’t see it; they would usually send you off especially at the Mass Start.”

The tape held; she finished 18th out of 30 skaters, and doing enough overall to qualify for the Youth Olympics in January.

Seventeen-year-old Donoghue turns 18 this month, just 20 days too soon for the IOC’s definition of ‘youth athlete’. Unfortunately they still sent a ‘welcome to the Olympics’ email.

“I was disappointed to be honest. I knew I was too old then they sent me the email confirming the place. I knew I didn’t have it so I was lucky in that sense, I knew not to believe it,” she says.

The World Championships is still to come so her school-skating act continues.

She lives in Holland with her Irish parents. And even in a country where skating is one of the top sports she has to keep her grades up to get away for competitions. They do allow Donoghue and other elite skater-students to skip PE.

Plus when visiting her mother’s parents in Co Clare, surfing in Lahinch for balance and giggles. Her Galway father has hurleys at home but Donoghue says it was always skating for her.

“I was about six-years-old when I started. It’s a traditional sport here, soccer would be probably bigger, but skating is something every one learns”.

As a child Donoghue dreamed of the Dutch National Championships but as an Irish passport holder that wasn’t possible. Invited to compete in England, someone there told her about the developing Irish scene and the Ice Skating Association of Ireland.

Now in her third year skating in the green, she says of that first season: “It was a special moment, it’s something to be proud about, something to tell my grandparents, I really enjoyed it.”

The beginning was tough as stronger skating countries usually send 17 and 18-year-olds for junior events; Donoghue was just 15.

Her mother, listening to the Skype chat, says she had to get used to it also and tries to stop seeing skating as dangerous. It’s a big financial commitment for the family too, as the ISAI can cover only Donoghue’s flights.

Sean Gillis, media and communications officer with the ISAI says: “Tara has done amazingly well when you consider how little funding we have. She qualified for the Youth Olympics ahead of other countries who would be much better funded so it’s a really amazing story.”

Gillis says Ireland’s only permanent ice-rink closed in 2010, now rinks are only available for Christmas lessons. Skaters travel to Belfast or live abroad.

“We are in a difficult situation; pretty much every country in Europe has a permanent rink. It’s a shame we don’t as we are inundated with requests. For every one person we accept we have to turn three away.”

She holds up her competition skates, demonstrates how the blade hinges apart from the boot and claps back after each stride, says they cost €1000 five years ago.

“No-one wears socks, that’s an interesting fact. The inside is made of leather so it doesn’t scrape your skin, it’s soft,” she says.

Those boots mould to a skater’s foot over time. A pair of 2,000-year-old skates made from cattle bones were unearthed in Finland. Today customised skates for Olympic athletes are made with stainless steel or aluminium blades and can cost well over €2,000.

1 Ireland v Scotland: Doris’ day as Caelan set for first cap
2 In mourning Kobe Bryant mourn the bad as well as the good
3 Gerry Thornley: Temple Carrig are the true schools rugby story of the season
4 How much do hotel prices rise for major sports events?
5 Men in Black: The referees for Ireland’s Six Nations games
Real news has value SUBSCRIBE