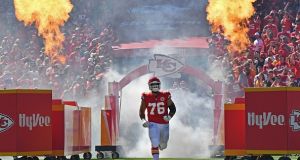 Draft night follows a familiar pattern for most players as they wait to be picked for their first NFL team out of college. There’s the nervous lead up to see which team selects them and then tears, hugs and congratulations with friends and family when the phone call finally comes through. But Laurent Duvernay-Tardif - doctor, sailor, amateur chef and offensive guard for the Kansas City Chiefs - has never followed the conventional path.

As he waited for his name to be called at the 2014 draft he wasn’t at home or at a party, he was attending an emergency C-section to assist a mother giving birth to premature twins. He handed his phone to a nurse and said, “If somebody calls, just say yes”.

As it turned out, Duvernay-Tardif needn’t have worried: he ended up being picked the next day in the sixth round. “When I got home, all my friends and the media were there, even though I didn’t get drafted and they were asking me, ‘Where were you?’ And I told them, ‘Well, I wasn’t done with my shift’”.

Duvernay-Tardif, who will help protect arguably the best quarterback in the NFL, Patrick Mahomes, against the Tennessee Titans this Sunday, has always been different. As a 12-year-old growing up in the Montreal neighbourhood of Mont-Saint Hilaire, he watched with fascination as his parents - who owned a local vineyard - hustled at markets, attempting to offload their cargo.

His academic commitments, particularly during a freshman year that saw him watch recordings of lectures at half-speed while furiously flipping through an English dictionary (French is his first language), ensured a breathless schedule

It sparked an idea in their only son. He grew his own basil, mixed it with olive oil and garlic, spooned it into various jars and sold the homemade pesto himself. That summer, while his friends flogged lemonade, he banked over $2,000.

Like the year-long sailing adventures around the Caribbean with his parents and two younger sisters.

“I had the privilege of a family that was pretty adventurous,” he says. “We went all the way to Miami and then crossed the Gulf Stream to the islands. We fished, travelled from community to community, met all of these new people and experienced so many different cultures ? Those experiences really defined me as a man, I think. Just experiencing such a different way of living and building a different relationship with time. We can get so stressed out these days - our phones, our social media - but here we were in the middle of nowhere with no cellular coverage. Our communication was with each other as a family and with all of these islanders who’d been there for generations.”

At midnight, Duvernay-Tardif would be summoned. As the rest of the family went to sleep, he took the helm and, for four hours, was in charge. “It wasn’t just the steering but I had to use the radar, the mapping and contact the authorities for proper clearances,” he says. “My dad gave me a lot of responsibility but I was a big part of the navigation and it was really nice.”

Still, he wasn’t always sure where he was going.

After his stint at the wheel, he’d listen to music - either Gerry Boulet or Richard Desjardins, two famous Quebecois musicians - stare at the stars and drift off to sleep. But there were no dreams of the NFL or Super Bowl rings. By that stage he’d already sampled football at high school and didn’t particularly enjoy it.

It was only in the run-up to college that Duvernay-Tardif started to properly embrace the game. His talent and size - he is currently listed at 6ft 5in and 321lbs - helped him stand out in the defensive line and when he was accepted to medical school at Montreal’s prestigious McGill University, he was inevitably tapped up by the coaches. But his academic commitments, particularly during a freshman year that saw him watch recordings of lectures at half-speed while furiously flipping through an English dictionary (French is his first language), ensured a breathless schedule.

The following year, Duvernay-Tardif worked various hospital shifts, including overnights. To ensure he’d make the team’s early practices, sometimes he’d sleep in the locker room in his scrubs. But he seemed to find calm in the chaos and when he transitioned to the offensive line, he excelled. His teammates nicknamed him Dr Kill, a sort of Jekyll and Hyde character - the sweet, caring medic and his ruthless, bone-crushing, intimidating alter ego.

By his fourth season in college, some whispered of a potential NFL career, and various teams came to see him in Montreal. But he told them all the same thing: continuing his degree was non-negotiable. “Some teams said, ‘Well, how do we know you’re fully committed to football?’ But others - like the Chiefs - told me, ‘This is amazing because it means you love the game and you’re here for the right reasons’”.

There was something else about Kansas City too. Their coach, Andy Reid, could relate strongly to Duvernay-Tardif’s passion for education.

“The first time I met coach Reid, he told me the story of his mum being one of the first women to graduate from McGill with a medicine degree,” he says. “And I think he really understood and respected what I was trying to do. And he trusted me. Without him, I don’t think I would’ve been able to graduate so I’m immensely grateful to him.”

The Chiefs made sure he could finish his studies once he joined them in 2014. “I met the dean of medicine, various faculty members and my professors and came up with a plan,” he says. “And the plan was that even if I made it to the Super Bowl at every opportunity, I’d come back to do three or four months of study every off-season for four years and graduate in 2018.”

And that’s what he did, much to the curiosity of his teammates.

“Every year, more and more of the boys started calling me Doc,” he says. “Sure, you got a little bit of teasing but at the same time, people were really respectful. The hardest thing over the last few years has been the transition - going from being an NFL player to a medical student and from Arrowhead Stadium and having the spotlight on you and your team to being at the bottom of the food chain in the hospital world and writing reports. Doing that when you know everyone else is on vacation isn’t easy but it paid off and it will pay off whenever I stop playing football.”

The 28-year-old’s expertise and unique perspective has led to a position on the Health and Safety Committee of the NFL Players’ Association. And given he’s suffered two concussions since his Chiefs debut in 2015, his opinion on the topic is regularly canvassed too.

“We’re playing a contact sport so of course injuries are going to happen, whether it’s musculoskeletal or concussion”, he begins. “And I think there’s a tremendous amount of work that’s been done - both by the league and the NFLPA - to make players more aware of the symptoms and also to enforce the rule on the field to try and decrease the targets to the head and those big hits. It’s been paying off so far.”

As strange as it sounds, when Duvernay-Tardif delves into his love of emergency medicine - the NFL did not allow him to add MD to the name on his jersey - he could just as easily be describing his day job. And he’s quick to draw comparisons himself.

“I love the adrenalin rush and the challenge of being able to make rational decisions in a stressful environment,” he says. “When a game is on the line and you’re blocking somebody, you can’t really freak out. You’ve got to look at all the details - this is the play, this is the coverage - and be rational about it. It’s the pressure you expect. And in a medical emergency, there might be a lot of stress and a lot of yelling but what are the vital signs? Is the airway stable? Is the breathing OK? Is the situation good? And you kind of proceed with the algorithm, the systematic approach. I think playing football has helped me be more calm. And when you’re calm you’re better equipped to process information and think.”

Mahomes and the Chiefs will hope that calm helps them past the Titans on Sunday.