Alexander Krushelnitsky, a bronze-medallist along with his wife in mixed-doubles curling at the Pyeongchang Winter Olympics, is suspected of having tested positive for the banned substance meldonium. Video: Reuters 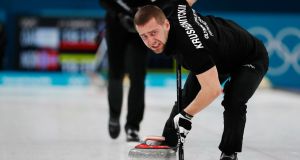 The Russian curling medallist who failed a preliminary drugs test on Sunday has left the Winter Olympics as the Court of Arbitration for Sport’s anti-doping division announced it has begun proceedings. The news, which broke late on Sunday, has put his medal into jeopardy and raised growing questions about whether the International Olympic Committee was right to allow 168 Russians to compete under a neutral flag.

Alexander Krushelnitsky, who won a mixed curling bronze medal last week, is suspected of testing positive for meldonium, a banned substance that increases blood flow and improves exercise capacity – a result that will be confirmed when the results of his B-sample are known.

However on Monday morning his team-mates on the Olympic Athletes of Russia team insisted he was innocent. “We were all shocked when we found out yesterday,” said Russian curler Viktoria Moiseeva. “Of course we very much hope it was some kind of mistake. With us it’s not faster, higher, stronger; it’s about being more accurate. I can’t imagine what kind of drugs you could use in curling ... so it’s very hard to believe.

Russian curling federation president Dmitry Svishchev said Russian curlers had been tested on January 22nd before flying out to South Korea and the tests were negative.

“I have known these guys for many years,” he said. “Only a crazy person takes banned substances before a competition, before the Olympics. It’s a strange story. It raises a lot of questions.”

Krushelynytsky is awaiting the results of analysis of his B sample, which is expected later on Monday, before a violation can be confirmed.

He has told Russian officials he fears a team-mate who was not selected for the Winter Olympics spiked his drink with meldonium at a training camp before he travelled to South Korea.

Meldonium was banned in 2016 and led to Russian tennis player and former world number one Maria Sharapova being barred from competition for 15 months.

The timing could not have been worst for Russia, who were hoping that their athletes would be able to march under their own flag at the closing ceremony next Sunday after the Russian Olympic Committee was banned from the Winter Olympics and ordered to pay $15m in costs in December after making what the IOC called an “unprecedented attack on the integrity of the Olympic Games and sport” following a massive state-sponsored doping programme that corrupted the Sochi Winter Olympics in 2014.

Krushelnitsky has not responded to a request for comment. He and his wife, Anastasia Bryzgalova, won bronze in a game against Norway. The Norwegians would take that medal if a doping violation were to be confirmed.

“I hope it’s not true ... for the sport of curling,” said Norwegian team skipper Thomas Ulsrud. “If it’s true I feel really sad for the Norwegian team who worked really hard and ended up in fourth place and just left for Norway and they aren’t even here.”

Meanwhile the Swede Sebastian Samuelsson, who won silver in the 12.5km pursuit race in the biathlon last week, has called on his fellow athletes to boycott the World Cup final in Russia next month.

The nation was at risk of losing the biathlon World Cup final in Tyumen and two second-tier events in Uvat and Khanty-Mansiysk as a result of the country’s doping scandal, however the International Biathlon Union has confirmed the events will go ahead as planned.

However Samuelsson tweeted that he was “hugely disappointed” at the decision. He added: “I think that a country that doesn’t have a working anti-doping organisation, and that hasn’t been given the all-clear by World Anti-Doping Agency to carry out tests should not be holding championships.”

The 20-year-old also called on other athletes to consider boycotting events held in Russia. – Guardian service

Matt Williams: Offloading skill has been obliterated from this Ireland attack 07:00
From purses to TV ratings: How Tiger Woods changed the face of golf 06:30
Long road to the top a fitting reward for dedicated McCarthy 06:00
Stephen Kenny finds replacement for Damien Duff on Ireland coaching staff 06:00
Colosseum will hold no fear for Test match animal Rónan Kelleher 06:00