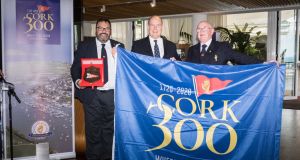 Never short of the right connections, Royal Cork Yacht Club’s 300th celebrations have got a boost with the royal seal of approval from not one but two European princes for its ambitious plans to put the oldest yacht club in the world centre stage in July 2020.

Last month the Prince of Wales added heft to Crosshaven’s birthday bash by donating a new trophy for a race from Cowes to Cork that will usher a world class fleet on to the Irish south coast.

And this week Prince Albert II of Monaco pledged his support for the club founded in 1720 on Haulbowline that is the cradle of world yachting.

The result is that RCYC looks set to produce a stand-out month of international fixtures on its famous Cork Harbour race track.

Sailing communities in Europe and as far as Australia, Hong Kong and San Francisco have already confirmed that they will attend.

Three European and four national championships will be decided and four major IRC rating events are now slated for the harbour.

It has led Tánaiste Simon Coveney (a leading member of the Munster club) to declare it “the most significant historic milestone that the Royal Cork Yacht Club and the sailing community worldwide will see in our lifetime”.

London’s Royal Ocean Racing Club has confirmed both its IRC European Championships and its Morgan Cup for the second largest natural harbour in the world, with a tricentenary trophy donated by Prince Charles himself.

This week Prince Albert II, who is president of Yacht Club de Monaco, hosted a special event to show his support for the Cork300 celebrations.

With the ICRA Nationals, IRC Europeans, Cork Week and Beaufort Cup now all confirmed for RCYC, the club will be on world yachting’s centre stage in 2020, and that’s a significant coup for incoming RCYC admiral Colin Morehead and his team.

Yacht Club de Monaco, which is the only club in the world twinned with the Royal Cork Yacht Club, says it will help promote the Cork300 event series both within Monaco and internationally. It will also participate in several events in Cork next year in which Prince Albert hopes to attend.

Sailor of the year

Irish Sailing delegates were among over 400 from 68 countries at the World Sailing Conference in Bermuda this week to applaud Italy’s Marco Gradoni crowned the 2019 male Rolex World Sailor of the Year, becoming the youngest ever recipient.

Gradoni, at 15 years old, was crowned Rolex World Sailor of the Year for his success in the Optimist class, having won three consecutive World Championship titles, the first sailor to ever achieve this result. Anne-Marie Rindom of Denmark received the female accolade.

Joan Mulloy from Co Mayo and Mikey Ferguson from Co Down are co-skippers on separate entries, and are in 24th and 27th place respectively, according to rankings, and now some 270 miles behind IMOCA class leaders in the race to Bahia.