Hannah Matthews ready for Olympic task ahead as family pitch in 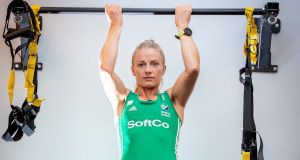 Hannah Matthews: ‘It is the most competitive it has ever been and there have been some really tough selection decisions.’ Photograph: Morgan Treacy/Inpho

Proper order. This week’s metaphor for bipartisan agreement is moving sweetly along. In a ghostly re-run of what the men faced last week in Vancouver, it’s Canada twice on Saturday and Sunday evening, the aggregate score from both matches winning a slice of Olympic pie next summer in Tokyo.

“He’s actually volunteering down there right now,” says Hannah. “Yeah got the whole family involved. He thinks it great for the sport. My mum told me they were looking for volunteers so she signed herself up and the rest followed suit.”

Folksy, but that’s how the sport rolls. If you have a one thousand piece jigsaw to put together for the underlay of the pitch surface, why not enrol hockey’s most reliable resource and cheapest labour.

This week’s games in Donnybrook have drawn more attention than almost anything the sport has done previously, with last summer’s World Cup run the obvious exception. It has been as if the appearance in the final has empowered Ireland to want more, licensed them to think bigger.

The national school teacher, who was part of the silver-medal winning team, looks at London 2018 and finds good reason to believe Tokyo 2020 is a possibility. Get to that milestone and medals won’t be far from their thinking. Like technical skills, fitness levels and strategy, mental barriers have been torn down.

“It’s definitely different I think,” she says. “Every time we got through another round of the World Cup it seemed like a bonus. No one was paying us much attention for a while. So there is that weight of expectation. But I think we have grown with the squad and I think we have to deal with that. I think it’s a great test for us.

“We have never done anything like this in hockey. To be able to get a stadium with a capacity of five or six thousand and for that many people to come and watch is fantastic. It’s great for the game. It’s just really nice to sing your anthem and not to an empty stadium, which we have done in the past. It really means a lot to us that Hockey Ireland and everyone involved have gone to this length.”

Her routine has fallen into a pattern since she began to job share at Dublin’s supportive Holy Trinity National School. Broadly she trains the weekend and first part of the week and works the second part.

This is an improvement from what went before and more face time together on the pitch has brought them together more often. It all comes after World Cup coach Graham Shaw departed for New Zealand. A bumpy few months but now the squad has enlarged and already there are new faces involved who were not in Olympic Park last summer.

And as good as London was the understanding remains that the team needs to evolve under new coach Sean Dancer. A 6-0 beating by the Dutch in the World Cup final was a demonstration that within the tournament there were different levels.

“Yeah I think we have progressed since London,” says the 28-year-old Matthews. “It is the most competitive it has ever been and there have been some really tough selection decisions. No one is certain of their place, which is how it should be. So it’s in a healthy place.

“We want to play in high-pressure situations. We get a buzz off that so . . . We are a top-10 team now and we need to perform like it.”

It has been difficult to detach from the shroud of disappointment that brought down the men’s team in Vancouver last week; an incomprehensible penalty award in the last second, a lost shootout and Canada have become this year’s qualifying nightmare.

But the women have had to find distance. For many of the squad the same crushing calamity from four years ago is still raw after missing out on a place in Rio 2016 when China won 4-3 in the seventh round of a sudden death shootout.

Four years before that in the London 2012 men’s qualifier hosted by UCD in Belfield, Korea snatched a goal from play against Ireland with seven seconds left on the clock.

“Heartbroken for the lads,” says Matthews. “Genuinely. Shootouts can be your best friend or your worst enemy. We’ve experienced both and I think we have that experience in the squad. A lot of us have experienced similar situations in past qualifiers.

“I think it has strengthened us and we have that resilience now. We know what it is like to feel that crushing blow and come out the other side. We want to make sure it doesn’t happen again.

“We are in such a different place now. The squad is more competitive than it has ever been. I think we are playing the best hockey we have ever played and I feel really reassured.”

Deeper down there’s a relevance to parents and friends helping to construct the Donnybrook pitch on which they will play. Strangely that’s the way Olympic Games have always been. For many athletes it is their life’s work. And it’s never anything less than a family effort.