Dublin Marathon’s lottery entry is one giant leap into unknown

There’s no guarantee, or loyalty to those who may regularly enter Dublin on time 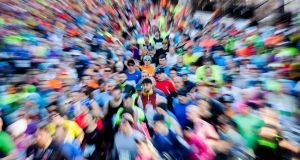 What had so far separated the Dublin Marathon from most of its other big city rivals was its guaranteed race entry. Photograph: Inpho

Of all the guarantees which come with running any big city marathon - the agony, the ecstasy, the fear of never being able to walk straight again - actually making it from the start to the finish has always been least among them.

At 26.2 miles, 42.1km, or around 138,000 feet, so much can and often does go wrong. That’s assuming you even make the start in the first place. Factor in the many other uncertainties (race day conditions, resistance to blisters, etc) and the marathon has always been one small step or giant leap into the unknown, depending on how well it’s handled.

What had so far separated the Dublin Marathon from most of its other big city rivals was its guaranteed race entry - at least for as long as the supply could meet the demand. For most of the now 40 editions of the event that supply comfortably sufficed, especially during the leaner years of not so long ago, and in many ways Dublin always felt like it was offering quality over quantity.

If anyone was serious about running, they could be among the first come, first served, and even if there was no guarantee they’d make it to the start (or indeed the finish) there was some comfort in that. Dublin had also dubbed itself the Friendly Marathon, for good reason - part of the welcome note being “come back next year”, which in recently increasing numbers they clearly did.

In 2016, the event was moved from its traditional October Bank Holiday Monday to the Sunday, which race director Jim Aughney said directly contributed to the first sell-out of runners of 19,500 that year, a 30 per cent increase on 2015. For the 2018 race, the new entry limit of 20,000 was reached a full six months in advance; for last Sunday’s race, those 20,000 entries were gone just 40 days after being made available, two days after the 2018 race finished.

A lot of people, it seemed, were left disappointed, even with only themselves to blame: as some consolation the organisers added a further 2,500 entries, and for the first time opened a small short window for entry returns, which were promptly snapped up within hours of going on re-sale in July, not helped by some “technical glitches”, prompting yet more disappointment and blame.

“We also didn’t just rock up to Dublin City Council and the Garda and say we need another 2,500 entries,” said Aughney. “We had to show them how exactly we would cope, and would cope safely.”

Even with that 22,500 limit, it appeared the demand had now fast outpaced the supply: it being the 40th anniversary of the race, Dublin first staged in 1980, no doubt added to the interest, but still there was no guarantee they’d all make it to the start, for a variety of reasons.

This is all factored into that race entry limit, although it was slightly surprising that of those 22,500, only 17,937 actually started last Sunday’s race - with 17,605 finishing, eclipsing the previous highest numbers of finishers (16,762) from 2016, although still well short of the event was cleared to cater for.

Against that backdrop came the announcement on Tuesday morning that gone was any guarantee of a race entry for 2020, and instead a lottery system would decide the allocation of those 22,500 places for next year’s race, set Sunday October 25th.

This decision wasn’t made overnight, but after repeated discussions in the wake of the 2019 sell-out in 40 days: “We believe the lottery is the fairest system to offer all runners the same opportunity to participate,” explained Aughney, no doubt conscious of the guarantee this would be met with some resistance and outcry. Especially given they had already encouraged runners to register early for the 2020 race to “guarantee” their place.

Many of the major city marathons already adopt a lottery entry system - namely London, Boston, New York and Tokyo - only their demand is on another scale. London celebrates its 40th anniversary next April, and had a record 457,861 ballot applications, with an entry limit of 45,000 (with 42,549 finishers earlier this year); however it’s not a straight up lottery, only 17,500 entries coming through this ballot, the rest coming through clubs, charities and other existing channels of race entry.

Instead of that first-come, first-served online process which has existed up until now, the Dublin entry lottery will be open from November 1st to November 30th 2019. Gone too is the early-bird price, the first 14,000 entries last year priced at €70 or €80 - all entries for next year priced at €90, plus €3 booking fee.

It is also hoped the lottery will provide the organisers with a more accurate measure of demand for entries, taking that figures to the city authorities in the hope of increasing event capacity, if so desired.

The organisers also claim the lottery will not be entirely random, and instead weighted in a manner to ensure that the current balance of Irish/overseas runners and different abilities is maintained. Athletics Ireland members will qualify under the Good For Age standards and can apply from April 1st.

Registrants will learn their entry status between January 3rd to January 10th; successful entrants will have until January 31st to redeem the offer. Any initial places not redeemed by January 31st will be re-allocated via another lottery; these applicants will learn their entry status via SMS and email between the February 4th to February 7th 2020. These offers must be redeemed by February 14th 2020.

The fee is €75 to enter (€90 less €15 already paid), plus additional purchases and booking fee (€3) as normal. A refund option will also open from June 2nd to June 15th (70 per cent of the entry fee will be returned once that application has been accepted). Any unallocated final numbers will be offered back to unsuccessful lottery applicants on July 1st -July 7th, with offers needing to be redeemed by July 14th.

Given over 4,500 didn’t take up their race entry this year, this cut-off still appears relatively early; other big city marathons also offer at least some avenue of entry for their most loyal entrants, such the Berlin Jubilee club. That might have been one small step instead of the one giant leap into the unknown which comes with any lottery, depending on how well it’s handled.